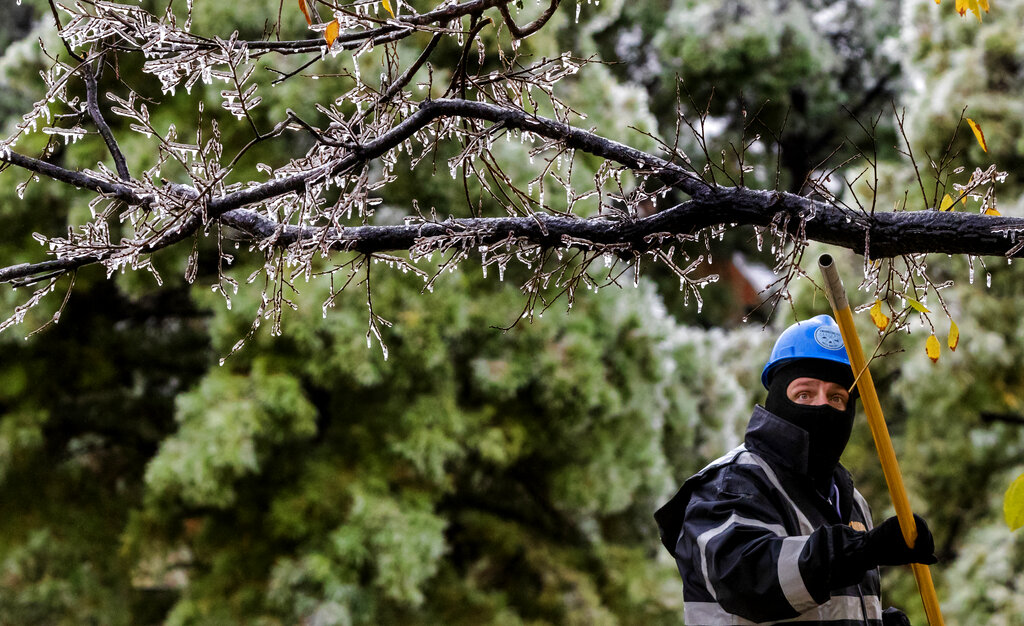 Crews work to knock the ice off the Survivor Tree at the Oklahoma City National Memorial & Museum in Oklahoma City, Okla. on Tuesday, Oct. 27, 2020, after a winter blast covered the state with ice.(Chris Landsberger/The Oklahoman via AP)

As of Sunday afternoon, 148,226 Oklahoma Gas and Electric customers are still without power from the Ice storm earlier in the week, with 1247 in Edmond.

The storm set the state record for the earliest ice storm on record in Oklahoma. Brian Alford, OG&E spokesman is quoted by the Associated Press saying “Fall storms like this are your worst nightmare. You still have leaves on branches that create a considerable amount of weight.”

On Oct 28, OG&E tweeted, “As it stands today, this ice storm is the 2nd worst in our history.”

The storm brought down branches across the state that not only took out power but also blocked roads and damaged houses and cars.

Among the trees damaged was the Survivor Tree, an American elm that survived the 1995 Murrah building bombing. It has become a symbol of hope for the area.

On Oct. 27, OKC Memorial tweeted that the tree had lost a branch but “OK State Forester Crews continue to work on the Survivor Tree.” A photo was tweeted along with the statement showing the broken branch along with limbs being supported by lumber and Ice being knocked from the branches.

Oklahoma City has announced that they are working on an emergency contract for debris removal that is expected to be finalized by mid-November. Also, Edmond is reporting power restored to all but a couple of hundred despite another outage today that has since been resolved.

Residential trash service customers in the city will be able to make use of the debris removal by placing the trees and limbs at the curb in a separate pile from regular waste.

The city will not pick up the debris if it is mixed with regular bulky waste. Trees and limbs should be cut into sections less than ten feet long. Bags of leaves can be placed in trash carts for weekly pick-up. Residents are also advised to avoid stacking the debris near poles, mailboxes and trees.

An official start date will be announced once the contract is in place and it will take several months to remove the debris from neighborhoods due to the volume of downed limbs. Pick up should begin before Thanksgiving giving residence time to get the debris to the curb.