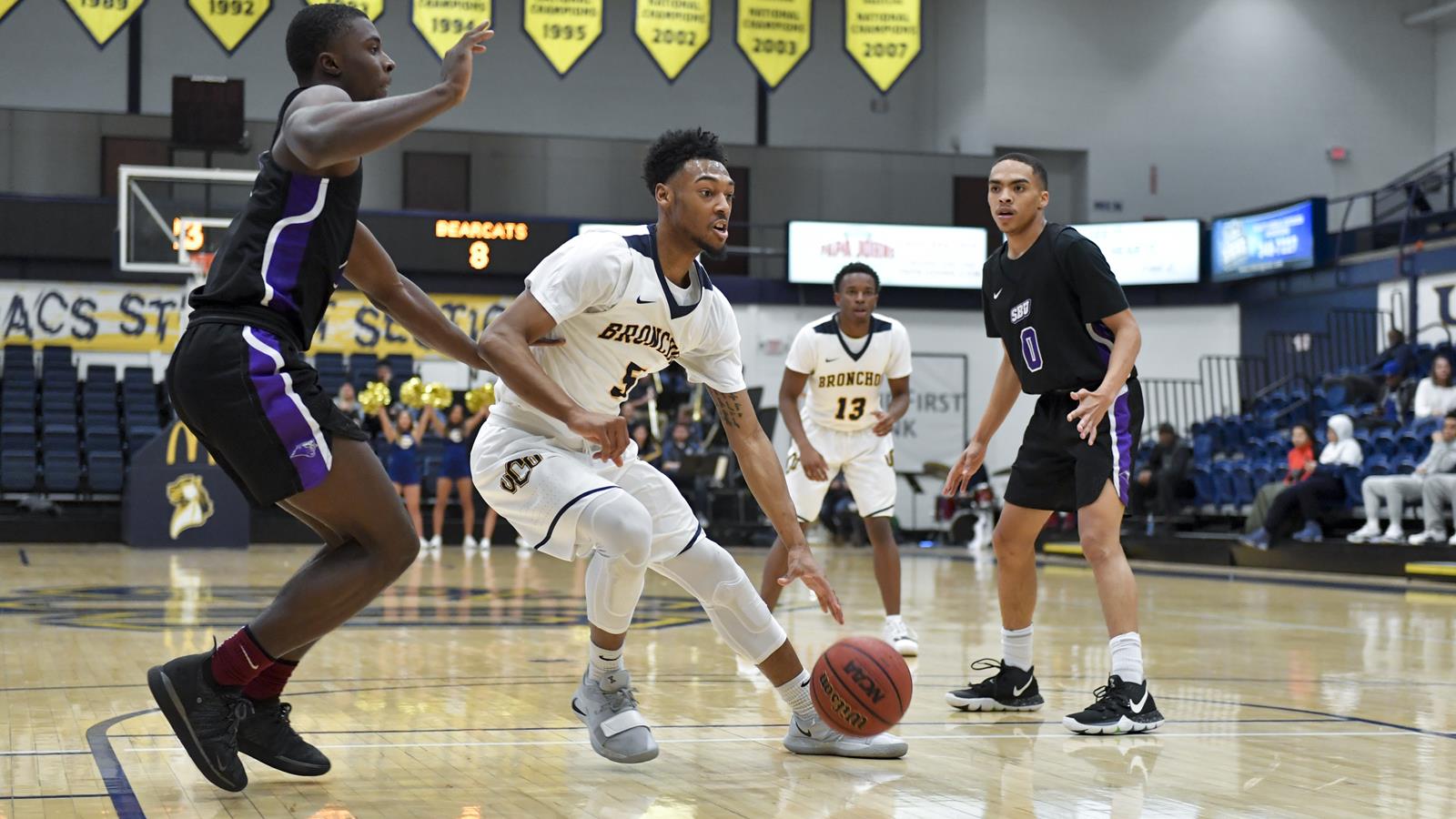 The Bronchos have lost a season-long four straight games.

After turnovers and a couple missed shots from both teams, UCO Junior Dashawn McDowell hit a three to open the scoring two minutes into the game. McDowell’s three-pointer was the only basket made by either team in the first four minutes of the game before Emporia State’s Keyon Thomas hit a layup to make the score 3-2.

UCO’s offensive woes against Washburn were not as glaring in the first half against the Hornets, as they matched their first half point total (23) just 11 minutes into the game sparked by a 5-7 start from 3-point range. Each of the 5 3-pointers were hit by a different Broncho.

The Bronchos controlled the majority of the first half until Emporia State took the lead back with a 7-2 run over three minutes that put the Hornets ahead 28-27 with five minutes left before halftime.

The Hornets took a 41-36 lead into halftime led by the hot shooting of guard Juhma’Ri Turner. Turner dominated the first half offensively, going a perfect 7-7 from the field and 5-5 from behind the arc for 19 points.

During halftime, UCO play-by-play announcer Tony Sellars announced that Emporia State held a moment of silence in remembrance of Kobe Bryant who died suddenly Sunday morning in a helicopter crash in California along with his daughter Gianna Bryant among others. “There was a moment of silence for Kobe and his daughter today in the arena, and it is just a sad, sad situation.”

At the first commercial timeout of the second half with 14:12 left in the game, UCO held a 50-49 lead following a three-pointer from guard Carson Calavan.

UCO’s Camryn Givens hit consecutive threes to put the Bronchos ahead 66-65 with 7:14 left in regulation. Givens ended the game with 17 points.

After a Keyon Thomas three-pointer put the Hornets ahead 75-73 with 4:27 left, UCO’s Dashown McDowell hit a long two-pointer to bring the game even at 75 with just under four minutes to play. McDowell finished with 16 points.

Emporia State guard Dallas Bailey hit a three to extend their lead to five with 2:38 left which Broncho forward Dashon Bell responded to with a layup to cut the deficit to just three with under two minutes in the game.

The Bronchos had no answers for the hot shooting of Juhma’Ri Turner who put the Hornets ahead by seven with two of his game high 32 points with 1:38 left.

UCO Head Coach Bob Hoffman was asked about the hot shooting of the Hornets and where he thinks his team could have played better, “They shot very well and we had some really good defensive possessions and some that were not so good… just really frustrating. Our transition defense just wasn’t good enough today.”

UCO had a chance to cut the Hornet lead to 3 with 30 seconds left with a 1-and-1 free throw opportunity for Carson Calavan who made the first free throw but missed the second.

The Bronchos will return home for a two-game homestand with a game against Missouri Western Thursday night and a matchup with Northwest Missouri Saturday afternoon. Both games can be streamed online at MIAA.com and listened to on 1560 AM.