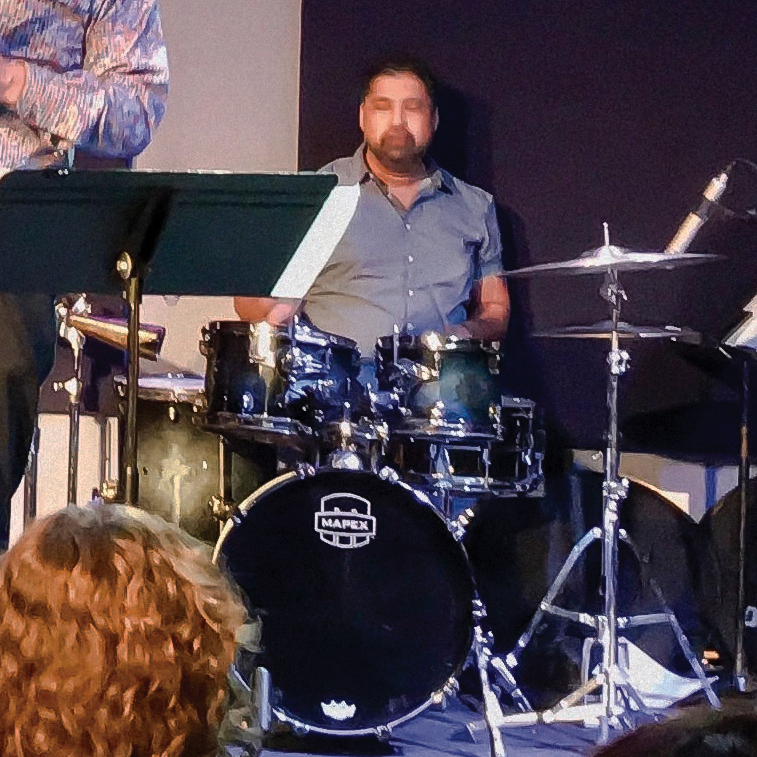 Michael Logan Walker plays the drums at the University of Central Oklahoma’s Jazz Lab on Feb. 8, in Edmond. Walker was shot on March 4, making this one of his last performances at UCO. Walker was a UCO adjunct, teaching percussion and drums from 1995-2004. (Brian Gorrell/Provided)

A GoFundMe page has raised over $52,000 dollars for the Walker family, who were victims of a double homicide that happened in Edmond last Monday.

Around 2:30 a.m. on Monday, police received a 911 call about shots fired inside of a home near E. Covell Road and N. Bryant Avenue. They found the bodies of Michael Logan Walker, 50, and Rachel Walker, 44, inside the home.

“My cousins lost their parents, and neither of them have the funds for a burial or any other costs that surely will arise,” said Kai Austin, the GoFundMe creator and niece of Michael and Rachel Walker. “[Besides that], we want to provide counseling for the family, as well as funds for basic living necessities.”

Michael Walker was a former adjunct at the University of Central Oklahoma. Their funeral services will be held on March 12 at 3 p.m. at Life Church Oklahoma City. Over 600 people have donated through the GoFundMe page, which Austin described as an outpouring of support from the Oklahoma community.

“So many people knew and loved my Uncle Mike and Aunt Rachael. Uncle Mike is kind of a legend here in Oklahoma because of his prodigious percussion skills. My aunt was bubbly and fun, and she made quick connections with people because of how big her heart was,” Austin said. “So, the donors are from every corner of Oklahoma because that’s how far my aunt and uncle’s love reached.”

Michael Walker taught at UCO from approximately 1995 to 2004 as an adjunct professor in the College of Music, teaching percussion and drums.

“He will always be an important [part] of the jazz program at UCO and we miss him,” said Brian Gorrell, director of Jazz Studies in the UCO School of Music. “I played what was to be my last time ever with him at the UCO Jazz Lab just a few weeks ago on Feb. 8.”

Gorrell said he knew Michael Walker since 1986 and has been close with the Walkers throughout the years. When UCO Jazz Lab was opened in 2002 on 5th Street in Edmond, Michael Walker’s office was right above the stage.

“We simply loved the new facility and Mike played with us there on the very first concert during opening week,” Gorrell said. “He was one of my best friends, and one of the most important musicians that influenced and shaped my career as a jazz artist.”

Michael Walker completed a bachelor’s degree in music from Oklahoma City University in 1991 and completed a master’s degree of music in performance from UCO in 1993. Gorrell said Michael Walker had an office in the music building, as he was a graduate teaching assistant and spent untold hours practicing.

“Mike hosted frequent jam sessions during those evenings and late nights, inviting diverse musicians from all over the city to come and play at times,” Gorrell said. “He was not a musical snob whatsoever, but instead loved to bring musicians that played different styles together.”

Gorrell said Michael Walker had a wide network in the Oklahoma music community and that he made everyone he played with “sound far better than they should.”

“He was one of the most outstanding musicians that the OKC music scene has ever produced,” Gorrell said. “He was a sought-after drummer for thousands of recording projects, concerts, bands, you name it.”

Gorrell said Michael Walker did not believe in musical limitations, instead he viewed everything, as he liked to say, as “just another option.”

“His openness, along with his quiet sense of humor, humility and kindness drew people to him like a magnet,” Gorrell said.

Police arrested their 19-year-old son, Michael Elijah Walker, on preliminary first-degree murder charges last week. He is jailed without bond and records do not list an attorney for him.

“Regarding his son Eli, he had been struggling with schizophrenia since the age of 14 from what we’ve heard from family members,” Gorrell said. “It had clearly gotten progressively worse to the point of being paranoid schizophrenia.”

The defendant told police his parents had not harmed him and that he shot them during an argument in his bedroom after he asked them a question about Satanism.

“The real tragedy here is also about his daughter Ashten, younger son and of course Eli, who likely doesn’t even understand or fully comprehend what he’s done and will be facing a life of turmoil and pain,” Gorrell said.

The Edmond Police Department obtained a search warrant last Friday to go back to the house with their bomb squad, with assistance from Oklahoma Patrol Highway bomb squad. They used bomb dogs and officers to walk the entire property outside and checked inside the house.

“We are not at the point in our investigation where we want to say specifically what we were looking for,” said Jennifer Wagnon, EPD public information officer.