Georgia teacher in custody after report of shots at school 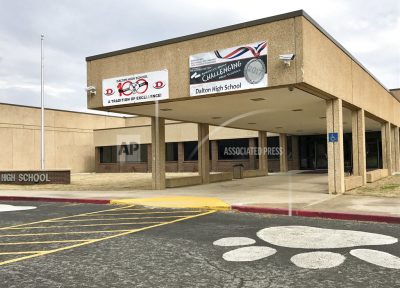 In this Feb. 24, 2018 photo, the main entrance of Dalton High School is shown, in Dalton, Ga. Police in Georgia say officers are responding to reports of shots fired at the high school and a teacher who may have been barricaded in a classroom is in custody. (AP Photo/Jeff Martin)

DALTON, Ga. (AP) — Police in Georgia say officers have responded to reports of shots fired at a high school and a teacher who may have been barricaded in a classroom is in custody.
Police in Dalton tweeted that no children were hurt or were in danger. Police spokesman Bruce Frazier tells The Associated Press that the scene is secure. Police are not immediately saying what happened inside the school.
Police say the school has been evacuated and students have been taken to the Northwest Georgia Center. Police are advising parents to go there to pick them up.
Dalton is about 90 miles (145 kilometers) north of Atlanta.
The identity of the teacher has not been released.
The high school’s website says it has 2,000 students.