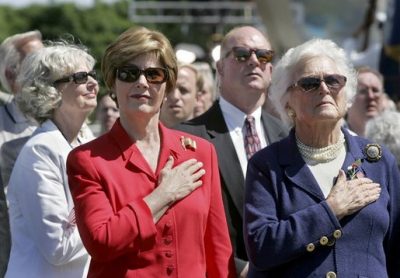 HOUSTON (AP) — A family spokesman says former first lady Barbara Bush is in “failing health” and won’t seek additional medical treatment.
Jim McGrath issued a news release Sunday saying that following a recent series of hospitalizations and after consulting with her family and doctors, the 92-year-old former first lady has decided not to seek additional medical treatment and will instead focus on comfort care.
He did not elaborate as to the nature of Bush’s health problems.
McGrath says Bush is surrounded by “a family she adores” and appreciates the many kind messages and prayers she’s been receiving.

Via @jamiegangel: 92-year-old former First Lady Barbara Bush is in failing health with COPD and congestive heart failure, and is being cared for at home in Houston after multiple hospitalizations. She and former President George H.W. Bush have been married for 73 years. pic.twitter.com/RwJOd4LGaJ