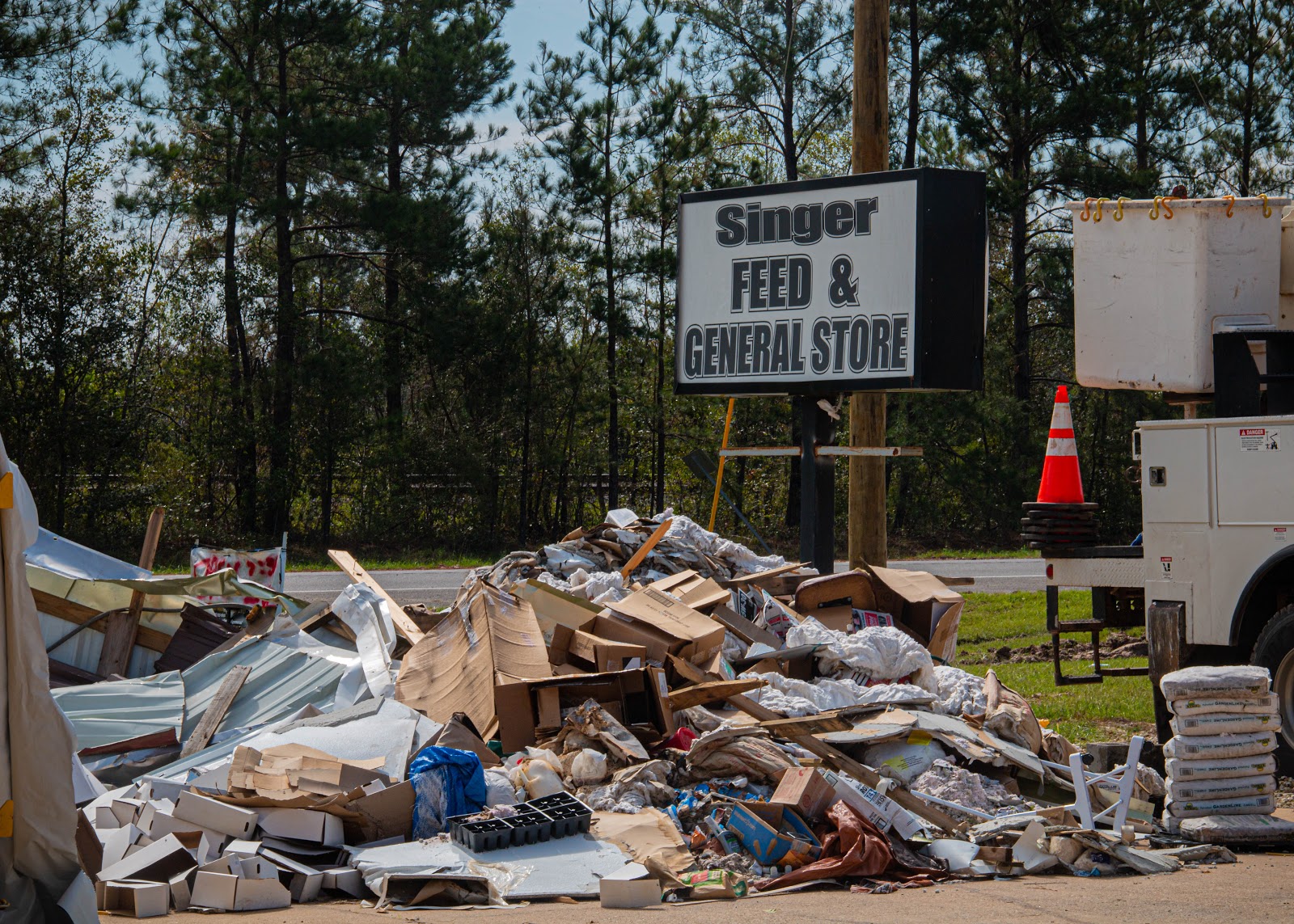 The Singer Feed & General Store in Singer, La. still has damaged goods in their parking lot on Sept. 6, 2020, almost two weeks after Hurricane Laura made landfall. The roof of the store blew off due to the high winds, and some of their products sustained water damage. (Gretchen Houk/The Vista)

Hundreds of people in Singer, La., and the surrounding area are still without power after Hurricane Laura ripped through their small community of 320 people on Aug. 27, but an Edmond church partnered with Singer Baptist Church to feed those in need.

Henderson Hills Baptist Church sent two teams to partner with Singer Baptist and provide over 1,500 hot meals from Sept. 2 to Sept. 6. Many residents are not able to cook for themselves or are using barbeque equipment since they do not have electricity. High winds from the hurricane caused damage to power lines, which could take around six more weeks to fix.

Singer Baptist Church, Singer High School and the Singer Fire Station have set up to offer supplies and food to the community, as they rebuild homes and buildings.

Singer is located about 70 miles inland, and is one of many communities in the Beauregard Parish, located in western Louisiana.

They previously had two stores, Singer Feed & General Store and Singer Food Store, but Singer Food was destroyed by the hurricane.

A large number of people are not able to work because their buildings are damaged or lack electricity. Many residents work at the DeRidder Paper Mill, but it has not been operating due to the power outages.

Singer Baptist Church is now setting up to be an official cooling station after the National Guard stepped in and provided two large generators to power their building and fellowship hall, where they are distributing supplies. Singer residents as well as those from neighboring communities will be able to come from 10 a.m. to 6 p.m., as of Sept. 7, to cool off from the heat and eat meals provided by the National Guard.

Singer Baptist Church is using their fellowship hall as a supply station. They open their doors in the evening for local residents to drive up and receive supplies like water cases, canned food, work gloves, masks and baby items. As of Sept. 7, the church will be able to power their fellowship hall with a generator given to them by the National Guard.

From Sept. 2 to Sept. 6 Henderson Hills cooked lunch and dinner and distributed individually packaged meals in a drive-thru line. They had help from local students, who took orders from the cars and helped individually wrap food. On Sept. 5, they gave out over 300 hot dogs for lunch. 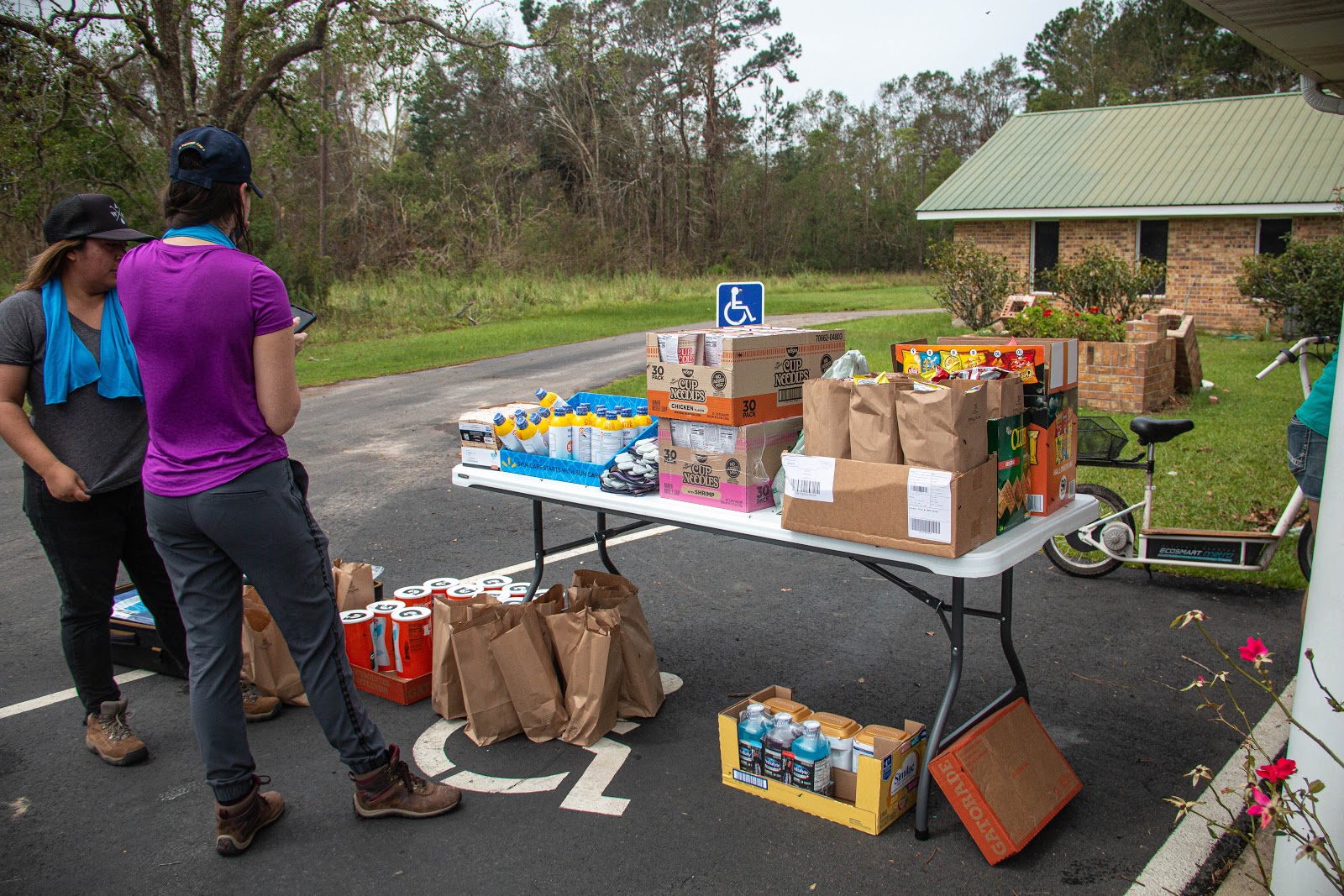 Singer Baptist Church, in Singer, La., opened its building for volunteers to set up supply stations. While volunteers from Henderson Hills Baptist Church, of Edmond, Okla., served lunch and dinner in a drive-thru line, two ladies from handed out goody bags with personal care items and other supplies like powdered Gatorade.

The Singer Feed & General Store finished putting on a new roof on Sept. 5, 2020. As the only store left standing in Singer, they had previously been operating with a tarp after Hurricane Laura ripped the metal roof off their building. They donated free hot dogs and buns to volunteers from Edmond, Okla.’s Henderson Hills Baptist Church, who were providing meals a block over at Singer Baptist Church.

A piece of metal roof was still in a tree behind the Singer Feed & General Store on Sept. 6, eleven days after Hurricane Laura tore it from the feed store building.

The Red Cross sent humanitarian aid to Singer, La., to provide hot meals for the community, which is still mostly without electricity. People from the nearby communities of Fields, La., and Oretta, La., also came to get food and supplies. The Red Cross will be providing dinner for the foreseeable future at the Singer Fire Station.

A disaster relief worker continues to work by the railroad tracks in Singer, La., during a mid-afternoon rain storm on Sept. 5, 2020. Hurricane Laura hit the small community of Singer, located about 70 miles inland, around 3 a.m. Thursday, Aug. 27th, and caused damage to houses, buildings and trees.

Linemen have been working to restore power to Singer, La., and nearby communities since Hurricane Laura knocked down power lines, leaving 400,000 Louisiana residents without electricity. The Louisiana Department of Health reported that a 25-year-old man from Natchitoches, La., 80 miles north of Singer, La., died of electrocution from a downed power line.

Singer High School is handing out supplies and ice to the community. The school, which has 338 students in grades Pre-K to 12th grade, was open for one week before Hurricane Laura hit, but has not been open for class since they lost electricity. Students do not have access to virtual content because most do not have power in their homes, either.