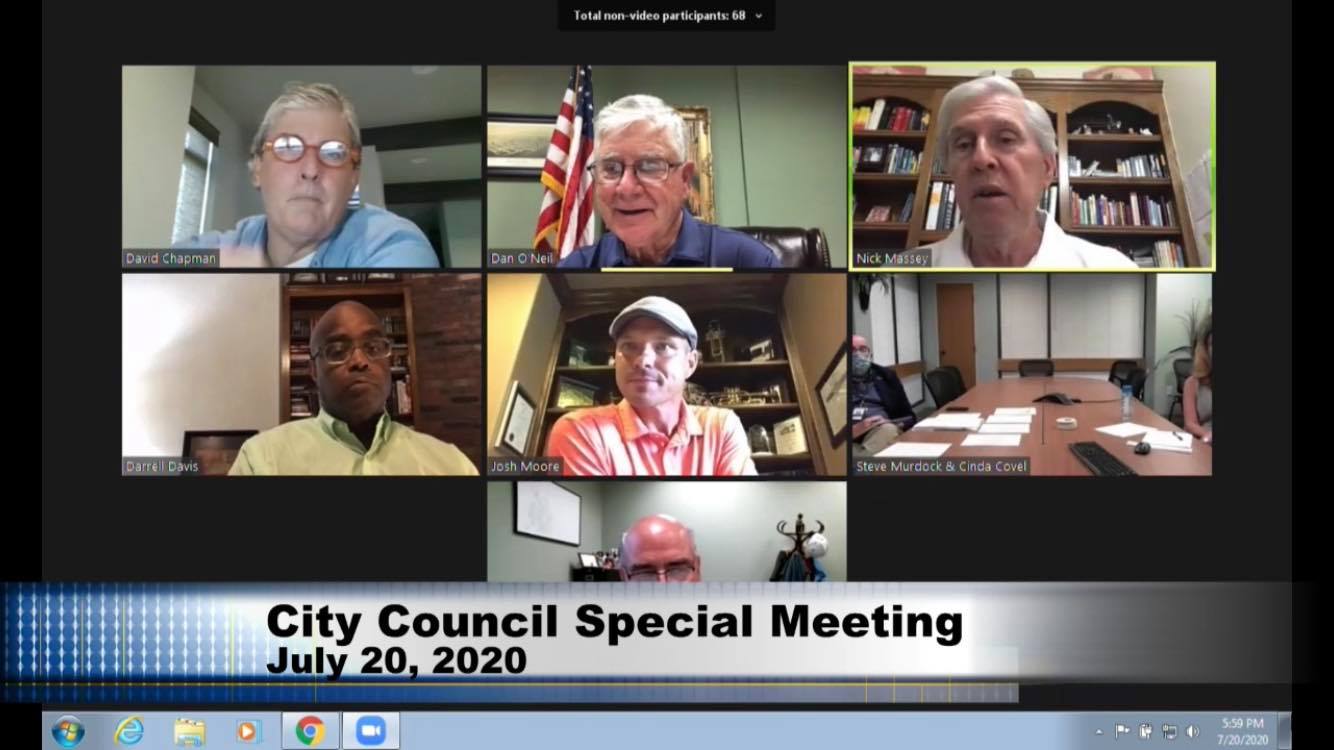 The Edmond City Council held an emergency meeting Monday evening to discuss potential amendments to the city’s current declaration of emergency, but failed to bring a mandatory mask ordinance to a vote.

The meeting included periods of discussion among council members and time for public comment. However, despite more than two hours of discussion no vote was held to amend the existing Declaration of Emergency.

Councilman Josh Moore was critical of the council’s process, noting that Oklahoma City-County Health officials had not been invited to participate, but that instead the council listened to public comment that included many members of the community citing incorrect data.

Moore also thanked the health care workers who had invested their personal time to speak during the period of public comment, but called into question among his fellow council members what the city council’s purpose was as a governing body.

The declaration builds upon previous community measures to help combat the spread of COVID-19 in Edmond. According to the city’s website, the declaration remains in effect with the following changes that last through at least Aug. 3:

The City of Oklahoma City Council approved a mandatory mask ordinance Friday. It went into effect immediately and lasts until Sept. 8, unless the City Council takes further action. It is not enforced in federal, state or county buildings. The face covering will require individuals age 11 and up to cover both the nose and the mouth.

OKC Mayor David Holt and the City Council met virtually for five hours to discuss recommendations regarding the mask ordinance, which passed 6-3, effective immediately with a 7-2 vote.

During a news conference this week, Governor Kevin Stitt announced he tested positive for the virus, but maintained that he will not mandate masks throughout the state.

“A lot of businesses are requiring it, and that’s fine,” Stitt said. “I’m just hesitant to mandate something that I think is problematic to enforce.”

Edmond is one of many cities throughout the state that have held emergency meetings to revisit mask mandates as hospitals across the state reach capacity.

Communities such as Enid voted against a mask ordinance.

Tulsa City councilors voted 7-2 on July 15 to approve a face covering ordinance. A few hours after Edmond failed to bring its to vote, The Village City Council passed a mask mandate ordinance with a 5-0 vote.

The Oklahoma State Department of Health reported 168 new COVID-19 cases and one more death in Oklahoma. The state now has a total of over 25,000 confirmed cases and 452 deaths.

However, due to a technical error, the case counts for Sunday and Monday are well below average and do not reflect real-time data according to the OSDH website.

In an Associated Press report, the OSDH stated the error was the result of “outdated data systems that often rely on fax machines and manual data entry are partly to blame.”

A similar technical glitch that occurred June 5 and June 18 was resolved in about 24 hours.

Last week, the University of Central Oklahoma reported it has had 13 positive COVID-19 individuals since June 1, despite strict campus restrictions.

The Centers for Disease Control has advice for wearing masks effectively. The CDC says cloth face coverings are an additional step to help slow the spread of COVID-19 when combined with every day preventive actions and social distancing in public settings.