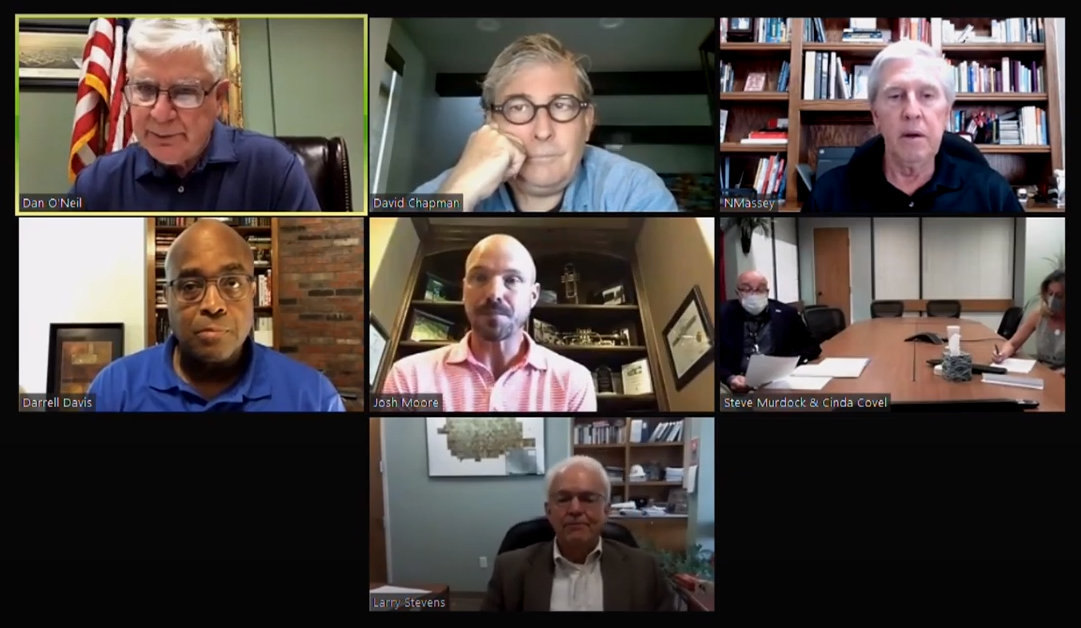 Members of the Edmond City Council discuss the city's current declaration of emergency during a special meeting on Aug. 3. The council voted, 3-2, to extend the expiration date of the city's mask mandate to Oct. 12.

The Edmond City Council voted, 3-2, to extend the city’s mask mandate during a special meeting on Aug. 3.

The ordinance will now take effect Aug. 26 as approved in the council’s meeting on July 27. However, the expiration date will be Oct. 12, instead of Sept. 6 as originally planned.

The council brought the item to vote at the Aug. 3 meeting specifically because doing so placed it outside of the 30-day period that would require a super-majority, of at least 4 votes, to pass.

Separately, the Edmond Public Schools Board of Education held a regular meeting to approve numerous items for the upcoming school year.

The board voted 5-0, to approve preliminary plans for an addition to Heritage Elementary School.

Underwood brought forth discussion on which teachers would be provided with the desk shields in question. Superintendent Bret Towne stated the number would cover about 95% of the teachers in Edmond Public Schools.

Benson and Underwood also wanted to clarify that the shields would not allow for the negation of required mask wearing.

Only specific instances allow for mask removal. Towne used the example of a teacher needing to see a child’s face when sounding out words for learning to read. Use of the shield and a face shield for the child would take place in this instance, according to Towne.

Benson raised a concern about funding, citing the exhaustion of district CARES funds. Towne stated funds would come from building funds or bond fund contingencies and not the general fund for the year.

Kuhlman questioned a vote to spend district money on equipment. She stated that if EPS transitions to an entirely digital model due to the rise of COVID-19 in the state, the district will incur a storage bill for the excess equipment purchased.

After discussion, the board voted, 5-0, to approve the item.

Board members Benson and Meredith Exline moved to discuss item 12:

12. Approve purchase of Capit Learning for K-3 grades district-wide in the amount of $100,000 using RSA Funds.

Benson allowed comment from Angela Mills Grunewald, Associate Superintendent of Educational Services, to clarify information on the system in question. Exline asked Grunewald for clarification on the data the system collects.

The board subsequently approved the item, 5-0.

Board member Benson also moved to discuss items 18 and 24:

18. Renewal: Approve renewal of HUDL agreements for the 3 high schools for cameras and scouting software programs.

24. Approve granting street and utility easements at Danforth and Thomas to City of Edmond with right of ingress and egress to and from said land and premises for the purpose of constructing, maintaining, replacing and operating a public utility or facilities necessary and incidental thereto through, over, under and upon the same.
• Parcel 1 – Kelly & Danforth
• Parcel 7 – Thomas & Danforth

Benson sought clarification on the contract details for the HUDL agreements. EPS Athletic Director Mike Nunley stated that cost would decrease if specific sports were unable to take place.

“If the state were to shut us down, then (HUDL) would be retroactive to either reimburse us or move to next year’s cost,” Nunley stated.

Nunley added that an entire season would have to face cancellation before reimbursement would be likely.

Underwood asked for the contract to include alternatives for partial seasons. Nunley stated that, because HUDL is the only provider of the service in the country, the company hold’s the control.

However, he added the company “gave their word” that they would work with the district. This caused further confusion for Underwood, who asked why HUDL would not alter the contract if they were willing to make a verbal agreement.

Benson raised an issue in item 24 with language corrected by an addendum. She also asked for contractual language to include specifics on scheduling so that construction would take place during the summer.

Towne stated that while an official contract update would not be likely, he would work to get a letter of commitment from the city.

Exline raised a concern about whether the city would be responsible for helping to pay for the cost of repairing the parking lot that would be torn apart during construction.

Benson then asked for clarification on just how much of the school district’s property would be torn apart for the project.

The board subsequently voted to unanimously approve both items 18 and 24.

The board moved to an executive session and upon their return voted, 5-0, to approve four supporting action items. The items included personnel changes and negotiations with staff and educator unions.

Meetings can be streamed live via the City of Edmond or EPS YouTube pages.