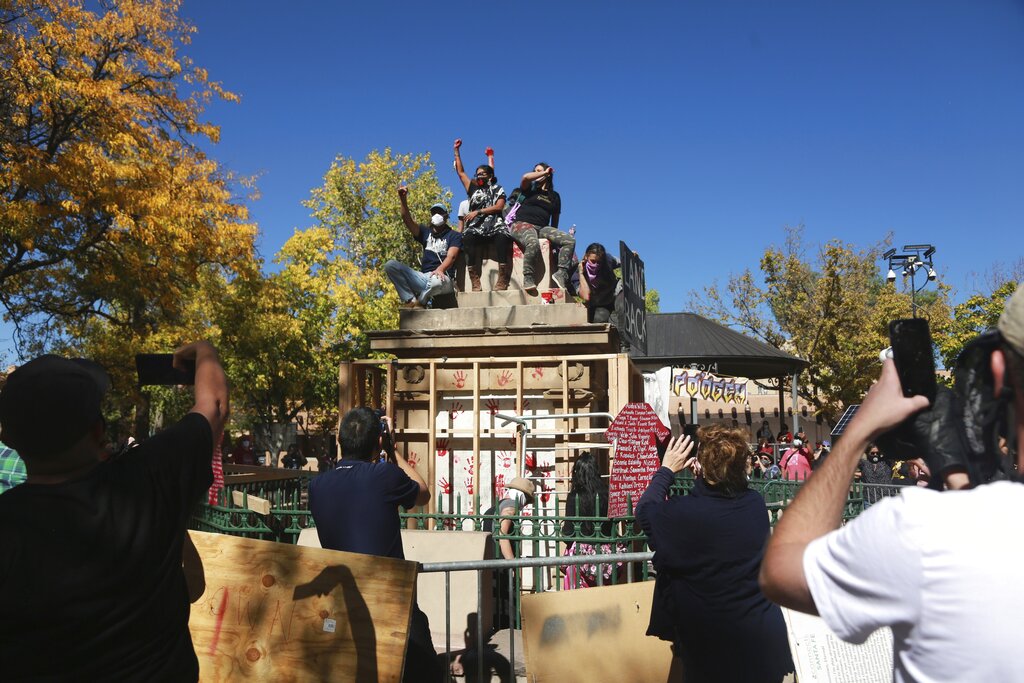 Demonstrators celebrate on the base of a stone obelisk torn down Monday, Oct. 12, 2020, in Santa Fe, New Mexico. In July, activists called for the monument to be removed during peaceful protests. On Monday, a group of around 50 protesters pulled down segments of the stone structure using a rope and a chain. It commemorates federal soldiers who fought against Indigenous people in the 19th Century. A reference to "savage" Indians was chiseled from the monument decades ago. (AP Photo/Cedar Attanasio)

Rather than celebrate Columbus Day, the University of Central Oklahoma will instead celebrate Indigenous People’s Day. In collaboration with National Native American Heritage Month, UCO hosted a roundtable on the topic of Decolonizing the Academy on Friday.

Facilitated by Bernadette Russo, an un-registered Mohawk and visiting assistant professor in the Department of English at UCO along with four other panelists spoke on what Decolonizing the Academy means and what actions institutions can take to separate themselves from the colonial ideology.

Dr. Russo explained that the idea of metropole in a settler or colonial context is a mother country or city that is used as a point of reference to orient settler colonialism in the region.

“Therefore things that cannot be referenced through settler colonial frames become erased.” This framing and erasure is part of the colonial construction of reality and knowledge. According to Russo the academy which includes grade schools and higher education have been complicite in this construction, “it is a primary sight in the determination and legitimation of knowledge, it’s distribution.”

The second speaker was Amanda Cobb-Greetham, a Cherokee chairperson and professor of Native Studies and director of the Native Nations Center, University of Oklahoma. She spoke on institutional decolonization, that the process can take place from student structures all the way up to administrators.

The next speaker Alyssa Provencio, assistant professor, Department of Political Science, UCO. Her segment was about knowledge,what is it, who is it for, who is it produced by, and what types are valued. She spoke about research and objectivity, how it values detachment and rationality, but it wasn’t until the 1930 that scientists questioned truly objectivity and developed positivism.

“For centuries, and still today students of the academy were taught to value knowledge that had been produced by scholars in controlled settings devoid of attachment to the subject.”

The next speaker Shun Kiang, assistant professor, Department of English, UCO spoke on decolonizing the syllabus. “When left unchanged over an extended period of time a syllabus might preempt or even foreclose meaningful encounters with new knowledge in the classroom.” By preventing the encounter with new knowledge this can cause uneven representation, marginalization of perspective, the recycling of half truths, and sanctioning of overt or implicit biases.

The final speaker was Nick Cragoe, visiting assistant professor, Department of Sociology, UCO. He described himself as a settler and said he wasn’t going to talk about how to decolonize the academy.

Cragoe said “I don’t think that decolonization can be accomplished by the colonizers certainly not while we chose to stay within colonial institutions.”

He chose to speak on how to address some of the more problematic issues in advising, curriculum, and interactions between students, faculty and staff.