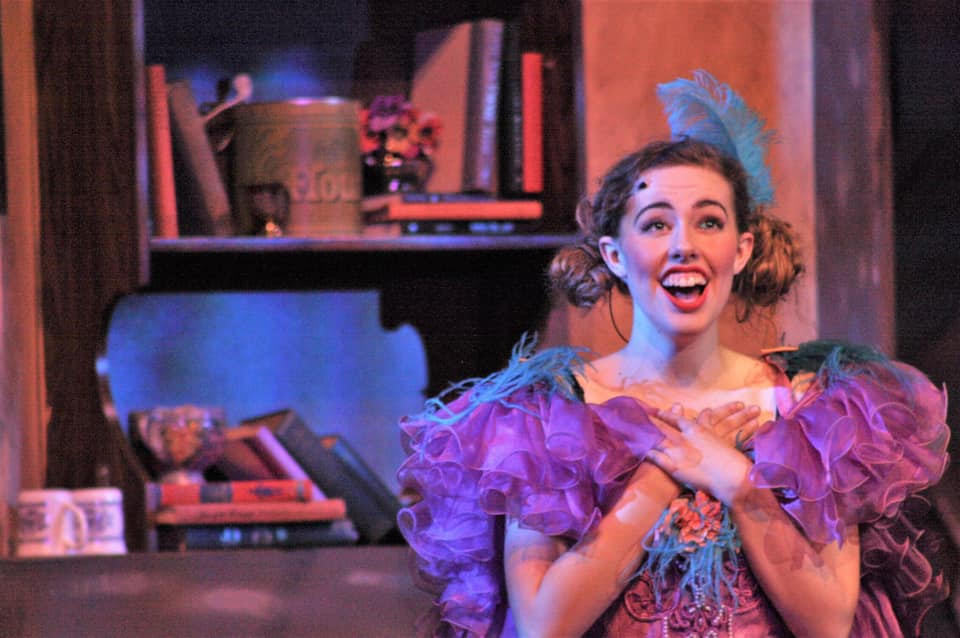 Bellah Crawford, a junior theater performance major at UCO, has been consumed by her passion for acting since before she can remember. Although Crawford was born in Oklahoma City, she spent most of her childhood in Los Angeles, where she received formal training through a variety of coaches and teachers.

Crawford was involved in the theater department at Southmoore High School before graduating in 2019. She now lives in Yukon and commutes to UCO every day.

Crawford recently portrayed Miss Scarlett in UCO’s production of “Clue.” However, this was not her first time performing in the Mitchell Hall Theatre. Last year, Crawford was cast as Daisy in Eugene Ionesco’s “Rhinoceros,” and as a freshman, she played Mirren in an adaptation of the book “We Were Liars” by E.L. Lockhart.

Crawford is influenced by many well-known actors and actresses, but she ultimately credits her classmates as her greatest source of inspiration.

Crawford’s love for acting is only matched by her love for words. Although her main focus is theater, she is also pursuing a minor in creative writing at UCO. With every mention of acting, Crawford uses her words to paint the most beautiful picture of a passionate young actress who is deeply in love with her craft.

“The humanistic value and reflection of life within this art has produced a fire that burns within my soul, and is released in a sort of catharsis for me on stage,” she said.

Crawford received an impressive number of awards for acting in high school, including the Best in Show title and an automatic qualification for the International Thespian Festival, a week-long theater festival for high school theater groups, in 2019.

For Crawford, acting is all about the process. This includes hours of intense research. “When I am given a role, I sort of attempt to perform a dramaturgical analysis of the piece and study it so that I understand it to the best of my knowledge,” she said.

Crawford’s first step in the process begins with the character she’s playing. It is important for her to know the character’s unique set of circumstances as well as the setting in which they operate.

“[For ‘Clue’] I researched the dialect and language of the decade and place, and overall attempted to gain a general awareness and understanding of the world during this time and the world that these characters live in,” she said.

Crawford considers her friends, especially those within the theater department at UCO, to be her greatest supporters.

After finishing her bachelor’s degree, Crawford plans to attend graduate school and earn her MFA in acting.