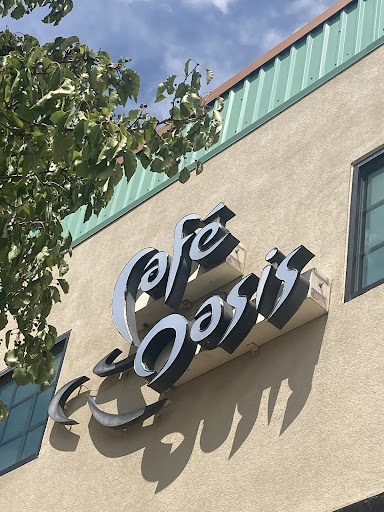 When the previous owner of Cafe Oasis, 1135 NW 25 St., could no longer open the door, two employees had a choice to make.

When the cafe, adjacent to Super Cao Nguyen supermarket, was up for sale, business and life partners Norman Haase and Emily Shan were the only interested buyers.

They took over last year because they wanted to “keep the doors open for the Cafe Oasis legend,” Haase said.

As the cafe celebrates its 20th anniversary, the pair reminiscences on their time working at the Taiwanese cafe.

Haase said the previous owner had been running “all cylinders” of the restaurant and “it just eventually got to the point where she couldn’t deal with the physical nature of the job and the work.”

“It was time to go ahead and move on, in her case, and that’s when the opportunity came up,” he said.

The couple needed more help running the business without their former boss.

Though Haase and Shan officially acquired ownership of the cafe last October, the transition was a cooperative effort with the previous owner, lasting a few months.

It took a lot of communication to make a smooth transition.

“The restaurant business over the last couple of years is a very contrarian business to move into,” Hasse said, mentioning the restaurant below them had just gone out of business.

In business, Haase said, “first and foremost, there’s always uncertainty. It kind of all worked out, you know, in an odd sort of way,” he said, calling Oasis, “part of the fabric” of Oklahoma City as one of the first boba tea shops to open in the Asian District.

“The whole time that the restaurant’s open, six days a week, she and I are there doing something or picking something up or, you know, doing something business related,” Haase said. “Which is well over 70 hours a week. But we’re busy. We’re busy people.”

“Everything that we use in our drink space is imported so you get a traditional Taiwanese boba tea experience when you come to Cafe Oasis, which is something that maybe even some of the long standing customers don’t even realize,” Haase said.

Emily Shan highlighted large bags of their real tea in two varieties: black and jasmine green. She said they use real tea instead of instant tea powder.

Even when the tea got expensive, “25, 26 dollars per pound,” Shan said, they still bought it because they did not want to change companies.

“They know us, we know them,” Shan said.  “A customer says ‘Hey, your tea is really good. [We] taste the difference. So that’s why I keep using it,” she said.

“Everything’s got a secret recipe,” he said. “It’s not easily duplicated, people come there for the taste, they come there for the drink, you know, the atmosphere, it’s kind of got everything you’d want to have in a small cafe type environment in the heart of a big city. Every day brings something different,”

When asked what his favorite part was about the cafe, Haase said it was “the fact that you can talk to a customer that’s been coming there for 18 years and loved every single bit of their experience.”

While the owner may change, Shan said, the food and the experience will never change.

“Bubble Tea, food, meat, veggie, everything – we buy the quality,” she said.