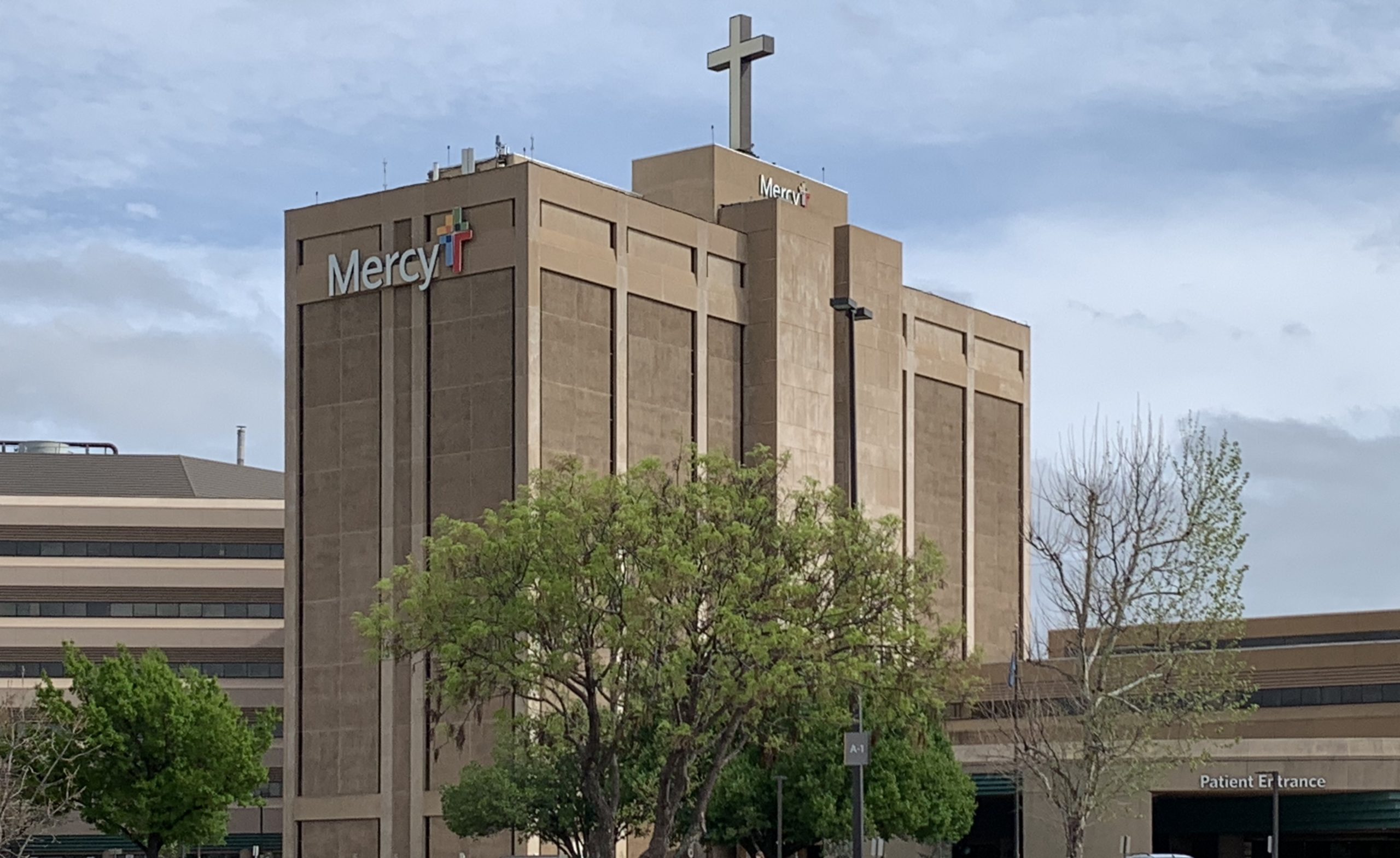 Mercy Hospital, located at 4300 W. Memorial Rd. is now checking the temperature of patients and asking them questions about their health upon entry. Hospitals will receive $100 billion in federal relief from the $2 trillion dollar stimulus package passed in late March. (Jeff Elkins/The Vista)

As the number of people seeking coronavirus related care rises, so does the strain on health insurance companies and consumers.

Some experts say Americans may be facing a rise in health insurance premiums.

According to Covered California, if carriers must recover 2020 costs, the price for the same level of costs next year and protect their solvency, 2021 premium increases to individuals and employers due to COVID-19 could range from 4 to more than 40 percent.

Kosali Simon, Herman B. Wells endowed professor in health economics at the School of Public and Environmental Affairs at Indiana University said she thinks premium price fluctuations will depend on a few different factors.

“Already, many insurance companies have announced they will wave cost-sharing, or trying to not have things be under the deductible,” Simon said. “What all of this will depend on is just how long will all of this be going on, how long are we going to be seeing the effects. There are so many uncertainties with exactly how many healthcare bills there will be.”

Simon said there is also uncertainty about what the federal assistance allocation will be in the different areas of the healthcare system.

“When Congress is thinking about stimulus payments and payments to businesses that are being hard hit, hospitals will be compensated for some of the cost,” Simon said. “Exactly how much their cost will be and exactly how much the federal payments will be is unclear.”

As a part of the $2.2 trillion stimulus package passed in late March, $150 billion is to go to the healthcare system, with $100 billion going to hospitals, although it is unclear exactly how much will go where due to administrative costs.

A study published in the Journal of the American Medical Association in January shows that administrative costs accounted for 8 percent of the U.S. spending on healthcare, as compared to a range of 1-3 percent in the other countries.

“In the same way, we don’t know how much insurers will end up bearing, but for sure every area is going to have to bear something,” Simon said. “So insurance companies are going to have to think about the options available to them.”

Simon said she thinks insurance companies in many states have to file what next year’s rates might be.

“Right now, insurers are wondering how much of an increase can they be allowed to have by states that say ‘we need to examine your rates before we tell you it’s OK to charge this before next year,’” Simon said.

Across the U.S., many hospitals have postponed elective and non-urgent procedures.

Simon said due to providers bracing for uncertainty, there may be reductions in healthcare costs that insurers are seeing because a lot of people are postponing their regular care, and in this scenario, we don’t know what April and May will look like.

One possible outcome, according to Simon, is that any relief that results from these reductions will quickly disappear due to an influx in coronavirus related care.

Infectious disease expert Dr. Anthony S. Fauci predicts that 100,000 to 240,000 could die from the coronavirus in the U.S, calling it “our real number.”

Some insurance providers are making changes amid the pandemic to ensure that cost is not a deterrence in seeking care.

Aetna will now waive member cost-sharing for inpatient admissions at all in-network and out-of-network facilities for the treatment of COVID-19.

Anthem, a Blue Cross and Blue Shield affiliate, suspended prior authorization requirements for patient transfers and the use of medical equipment crucial to COVID-19 care. Anthem is also waiving cost-sharing payments related to COVID-19 treatment.

Blue Cross and Blue Shield Oklahoma has not yet announced any plan to waive cost-sharing or suspend prior authorization for COVID-19 treatment.

UnitedHealthcare is waiving member cost-sharing for the treatment of COVID-19 through May 31, 2020, for its fully insured commercial, Medicare Advantage and Medicaid plans.

Simon predicts the system will further strain due to the cost of ramping up testing, as well as the care for those who are hospitalized. This is without factoring in a vaccine and how expensive that is eventually going to be.

Many of those Americans who have been and will be hospitalized are a part of the 64 million people on Medicare, with 22 million of those enrolled in Medicare Advantage plans.

“After testing positive for the virus, the rate at which one actually ends up having high health needs and healthcare needs will be dependent a lot of times on age and comorbidities, so Medicare is going to be heavily hit by the hospitalization needs,” Simon said. “The needs will be disproportionately more for older individuals with comorbidities.”

According to Simon, there is no premium equivalent to Medicare, but there is a financing issue with the solvency of the Medicare trust fund.

“Medicare is not a kind of insurer that has to calculate what its premiums will be next year, however, a concerning issue is that it operates on a trust fund that the federal government has, and this trust fund has been given dire predictions because of population aging, and all sorts of other things,” Simon said. “We have had more healthcare technology being available, so the prospects of what Medicare’s budget looks like, the solvency of that, has been a worrying issue regardless and this pandemic is only going to compound that.”

A report from The Kaiser Family Foundation in 2019 projected that the Medicare Hospital Insurance (Part A) trust fund is projected to be depleted in 2026.

Kansas City, Missouri resident Andrew Sprouse recently lost his job as a manager at Torchy’s Tacos due to the coronavirus. He also lost his job-based health insurance, but made too much money to qualify for Medicaid, a social welfare program ran jointly by the federal government and the states that provides healthcare to around 70 million low-income Americans.

“I am very concerned about getting the virus while being unemployed,” Sprouse said. “I am considered high-risk due to my asthma, so it’s something I’ve been pretty worried about.”

For Sprouse and many of the projected 3 million Americans expected to lose their jobs by summer according to the Economic Policy Institute, there are two options.

They can either pay the entire cost of the employer plan through the Consolidated Omnibus Budget Reconciliation Act (COBRA) for up to 18 months, or get a plan through the marketplace within a 60-day window.

Brett Casey, insurance agent with HealthMarkets said the first place to look would be the marketplace.

Casey said most of Oklahoma would qualify, especially if there is a job loss.

“They will be able to get legitimate health insurance coverage, pre-existing conditions, the whole nine yards, and get it subsidized, and what that does is they get real insurance in which they can go pick a plan, but it’s lowering the cost by bringing in an extra payer through the federal government, so they still get to pick a Blue Cross plan or a major plan but in many cases, they are getting it for hardly any cost,” Casey said. “That certainly beats the alternative of paying $1,400 a month for COBRA.”

COBRA has been subsidized by the government once before.

During the Great Recession of 2008, the American Reinvestment and Recovery Act (ARRA) provided a tax credit that covered 65 percent of health insurance premium costs for unemployed workers who kept their job-based plan through COBRA.

A U.S. Treasury assessment revealed that around 80 percent of individuals who utilized the ARRA COBRA subsidy had household annual incomes between $30,000 and $134,000.

This would give many families another option to limit gaps in coverage without having to pay the entirety of their old employer’s share of the plan.