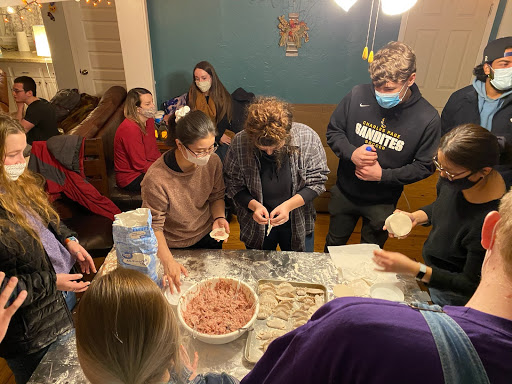 The Chinese New Year celebration took on a different look at the University of Central Oklahoma this year as the ongoing pandemic and the winter storm caused the celebration to be postponed until Saturday.

The International Student Council and the Asian American Student Association will hold a delayed Lunar New Year event. There will be a pick-up service of goody bags at the circle drive-thru of Nigh University Center between 5 p.m. to 7:30 p.m. Friday and a live stream event with cultural performances through YouTube and Facebook Live at 5 p.m. Saturday.

“Previously, the Chinese Student Association would have a party on campus to celebrate Chinese New Year and introduce Chinese culture to others, due to the pandemic, I guess this party might be canceled this year,” said, Jicheng Fu, a computer science professor.

For the Chinese, Lunar New Year is a new beginning, and people might think about what has changed.

Shuai Zhang, a UCO assistant professor in computer science, said he thought the price of his apartment has increased, compared to last year.

“I think that could be a moment when I realized a lot of things had changed,” Zhang said.

Zhang said it has been a long time since he celebrated Chinese New Year with his family; he has not had a chance to see them except through a video call.

“We have to talk through video chat. Yeah thanks to technologies, yeah we can do that almost every day. And yeah like my mom said, at least we can see each other, you know, in a better way, we can talk to each other freely,” Zhang said.

“Compared to the old days, we have to send a mail, maybe, take a week or even longer, now we can have instant communication, so that is like the compensation to the fact that we cannot meet each other face-to-face, especially during the spring festival,” Zhang said.

The “spring festival” is another name for Chinese New Year. In a common way, as well as Chinese lunar New Year, people would celebrate serval days in the month of February.

Bradley Unruh attended an event to celebrate the holiday. Unruh said he imagines the real thing as “fireworks, large crowds and food vendors.”

“I honestly don’t know too much about the Chinese New Year,” Unruh said. “It was fun — like a community — many helped in making the dumplings. It was just a good time for conversation, laughs, good food and live music,” Unruh stated.