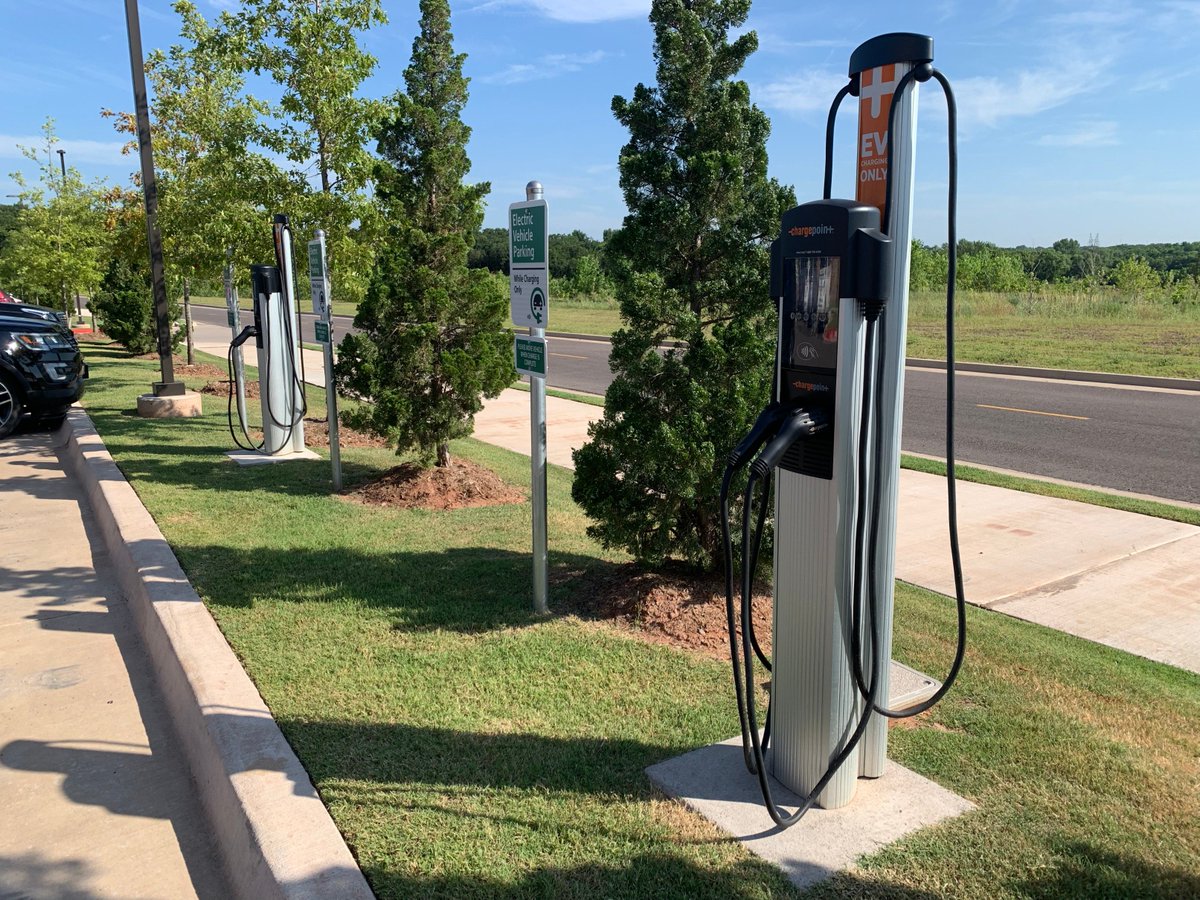 Charging Stations For EVs Coming To UCO and Edmond

Charging stations for electric vehicles will be on the University of Central Oklahoma’s campus and throughout the city of Edmond by the end of October.

Phil Jones, sustainability planner for Edmond, said as of right now, there are four concrete locations for the stations, however, the city will expect to have 10. UCO’s four stations will be in the Nigh University Center’s visitor parking lot.

In Edmond there will be stations at Mitch Park near the senior center and trails, at the Service Blake Soccer Complex and at the City First Administration building downtown.

“Additional future public stations are being planned by Edmond Electric and currently include ShowBiz Cinemas and the future tennis center on 15th Street,” Jones said.

The stations are dual charging, which means that each unit can charge two vehicles at once, according to Jones.

Benjamin Hastings, assistant vice president for operations at UCO, said usage of the stations on campus is free for students and faculty with a valid UCO decal. Visitors can use the stations by paying the visitor lot fee.

In terms of cost for the surrounding Edmond community, Jones said the stations will initially be free, but are built with the capability to take a fee.

One dual station takes up two parking spaces, but Hastings and Jones said they believe believe the stations will not cause parking to become limited on campus or throughout Edmond.

In addition, UCO has added 300 new parking spots on campus.

“Taking a few [spots] to turn into charging stations will be a benefit to the community,” Hastings said. “When an [EV] is getting charged, it will free up a spot in one of the other lots.”

The locations of the stations were considered for parking availability. City parks and activity centers were chosen because they are “where people can enjoy the city’s amenities while they wait” to charge their vehicle, Jones said.

The stations are not fast-charge units, since many EV owners fully charge at home, Jones said.

“We want to support green initiatives and infrastructure,” Hastings said. “Our UCO community benefits when we can do things to help the planet.”

The stations were made possible by two grants: a Clean Air Public Fleet grant for $25, 138.60 from the Association of Central Oklahoma Governments, which was awarded March 28; and the Oklahoma Department of Environmental Quality 2019 Charge OK Grant Program for $25,367.00, which was awarded June 21.

There was interest from multiple parties who were involved in the discussion of having charging stations in Edmond for various reasons. The Oklahoma Municipal Power Authority, who Edmond purchases its power from; the ACOG, the regional metropolitan planning organization for the Oklahoma City metropolitan area; and the ODEQ were part of the initiative, according to Jones.

“The benefits of owning an [EV] are unmistakable when considering emissions, lower maintenance costs and fuel costs,” Jones said.

“[Edmond] facilities use 100 percent renewable energy, delivered by the OMPA, so these stations will also be powered by renewable energy,” Jones said. “It’s an economic benefit to residents and [Edmond], it begins to define a public network for EV owners and that satisfies a societal need and it provides an alternative for a clean transportation, which is good for the environment.”