The University of Central Oklahoma has dropped from the ninth safest campus in the nation to the 19th safest campus for 2018 in a study from Alarms.org based on crime statistics.

Alarms.org created the ranking using the most recent data from the FBI’s Uniform Crime Reporting and the Campus Safety Security Survey put out by the U.S. Department of Education. The safe score was calculated by analyzing crimes reported by universities, including rapes, robberies, assaults, burglaries, motor vehicle theft and arsons. Also factored into the safety score were violent and property crime rates for the cities in which the schools were located, and the number of law enforcement officers employed by the institution per 1,000 students.

As stated on the website, UCO has three cases on violent crime and 61 cases of property crime. Oklahoma State University ranks 89th and University of Oklahoma ranks 121st on the list.

According to UCO Police Chief Jeff Harp, it is difficult to compare campuses because it depends on the population of each campus as well as the location. Oklahoma campuses usually have low crime rates.

“Every community has its own particular crime pattern that can change,” Harp said.

According to Harp, the 2018 annual safety report will not be ready until mid-2019 as they continue to finalize the findings. Based on UCOPD’s daily crime log, 214 incidents were reported compared to 198 incidents in 2017 and 219 cases in 2016. 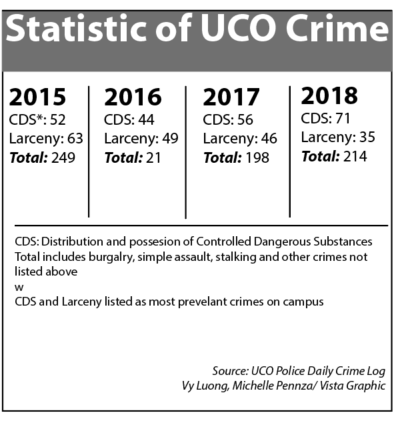 Those cases happened on campus, at some non-campus properties such as sorority and fraternity houses or public property, such as a sidewalk around campus.

“Our crime rate in different categories will go up or go down based on a lot of factors that are sometimes beyond our control,” Harp said. “Sometimes it’s also because we have more people reporting things for some reasons.”

According to Harp, some factors that may affect the crime statistic include increased awareness about sexual assault, which results in more victims coming forward. In the case of alcohol violations, Harp said he is much more aggressive in enforcing alcohol laws in student housing.

“Some society issues may also reflect on campus; right now, it is marijuana. We see the number increase because we have medical marijuana now,” Harp said. “We also have recreational marijuana in Colorado and in other states, so people can go on Christmas or spring break and buy it legally there and then transport here. This has been something we have seen in the last two or three years.”

“Essentially, our crime rate in some areas goes down, some reasons go up, but the drops and increases are consistent year to year,” Harp said. “We don’t see the trend of more and more cars stolen or more arsons year to year. It’s relatively low.”

According to the 2018 daily crime log, the crime rate drops during summer. The crime rate between November and December increased drastically compared to other months. 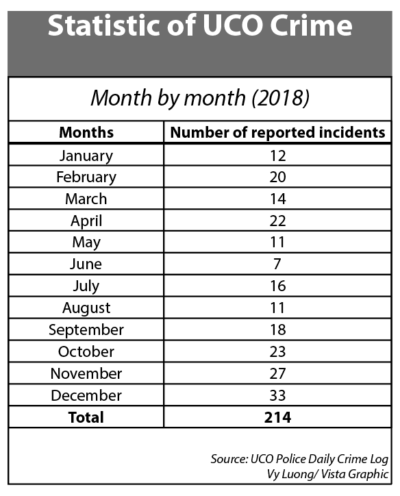 Harp said at the end of the semester when people move out of campus housing, the crimes may occur more. He said one crime that may often occur at the end of semester is that students may steal textbooks in an attempt to sell them.

Crime on campus tends be low during summer because the on-campus population is also low.

“Statistics are statistics, and we know that a lot of things happen but don’t get reported,” Harp said. “We always encourage reporting to see if we know if a timely problem exists, then we can rely on resources.”

The UCO Police Department updates the crime log almost daily and people can still request the police reports to have more details about the cases.

Harp said that in his observations after coming here 18 years ago, UCO is a low crime campus based on the population. The campus’ location in Edmond, which also has a low crime rate, helps to maintain the campus safety. Other programs on campus such as Safe Walk, Blue Boxes and 24/7 police also contribute to it.

UCO Police have an agreement with the City of Edmond to focus more on the crime on campus, but they also work with the Edmond Police Department on some incidents. UCO Police also send out Central Alerts about some incidents that happen off campus if they might cause a threat to the UCO community.

“We have to look at each situation to figure out if there a likelihood or possibly of  any ongoing threat to the community,” Harp said on how UCO Police decide to send out a Central Alert.

The latest Central Alert was sent out on Jan. 22 regarding an armed robbery that occurred at a residence on N. Chowning near UCO’s campus. The suspect has not been arrested and the Edmond Police Department is still investigating.

Central Alert: Edmond police are investigating an armed robbery on N. Chowning earlier this evening. Three black male suspects wearing masks were reported to have left the area in a black-colored Jeep Cherokee. Anyone having information should notify Edmond or UCO police.