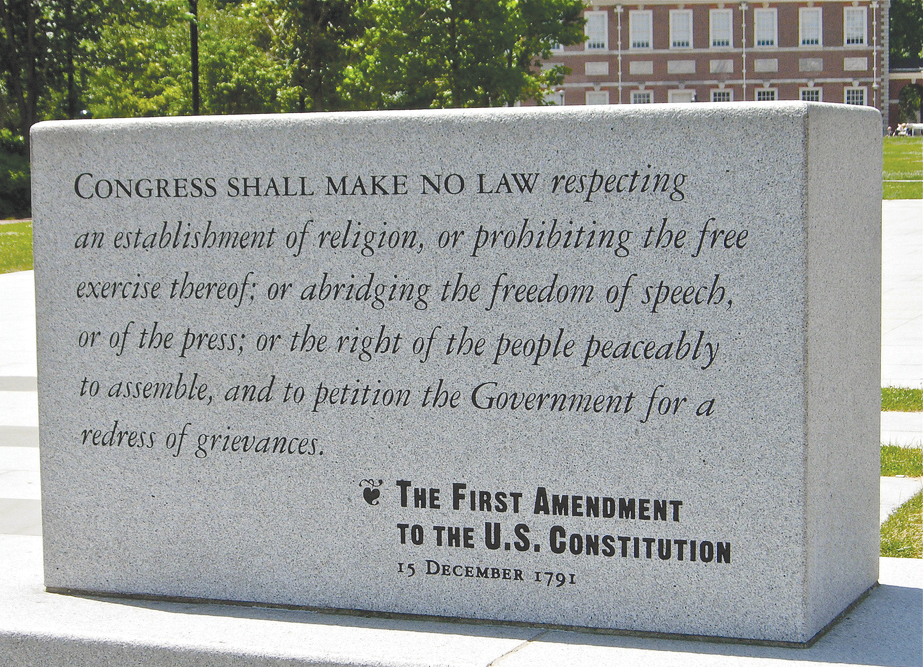 A marble slab depicting the First Amendment of the U.S. Constitution in Philadelphia. University of Central Oklahoma President Don Betz declared April 25, 2019 as First Amendment day in recognition of the importance of free speech on college campuses. (Provided/dcwriterdawn)

Students Erin Barnett and Trevor Stone worked with Mass Communication Department Chair Mary Carver and E.K. Gaylord Endowed Chair of Journalism Ethics, Joe Hight to plan activities for the day. They received a $6,000 grant from nonpartisan program 1 for All to design the event. Betz and Miss UCO, Shelby Love, have agreed to partake in the day as well.

“It’s a total education of what the First Amendment is. It’s a campus-wide, not just one-building-wide, type of approach,” Hight said.

The event also coincides with the start of the 50th year of the Oklahoma Journalism Hall of Fame. Part of the day will include inducting the 49th class into the Hall of Fame.

After the induction ceremony, attendees would to a march from the Nigh University Center to the Mass Communication building, where a display of the First Amendment is planned to be put on one of the raised walls near an entrance to the building.

After the march, panels featuring newly inducted Hall of Famers and guests from other universities and organizations will be in Room 120 of the Mass Communication building. The day of events is tentatively scheduled to run from 11:30 a.m. to 6 p.m.

First Amendment Day is planned to be a campus-wide event that focuses on more than the Mass Communication Department. Meetings are in progress to determine ways students and professors from other majors can participate and connect the First Amendment to their lives, jobs and areas of study.

As part of this campus-wide connection, two contests are being held: any student, major or student organization can come up with ways to use the First Amendment or discuss its importance, and an essay competition. Both contests have prizes of $500 for first place, $250 for second and $100 for third. The creators behind First Amendment Day felt this was a good incentive to get people from other departments to participate.

“When [organizations] are tabling outside they’re giving out headphones and PopSockets, and everybody else is giving out cookies,” Barnett said. “If [people or student organizations] see $500, they’re gonna be like, ‘Oh, we could use this $500.’”

A large bulletin board will be placed in front of the Nigh University Center and anyone on campus can write on a sticky note about what the First Amendment means to them, what they use it for or any quotes that remind them of the amendment.

A keynote speaker is currently being discussed, but has not been finalized.