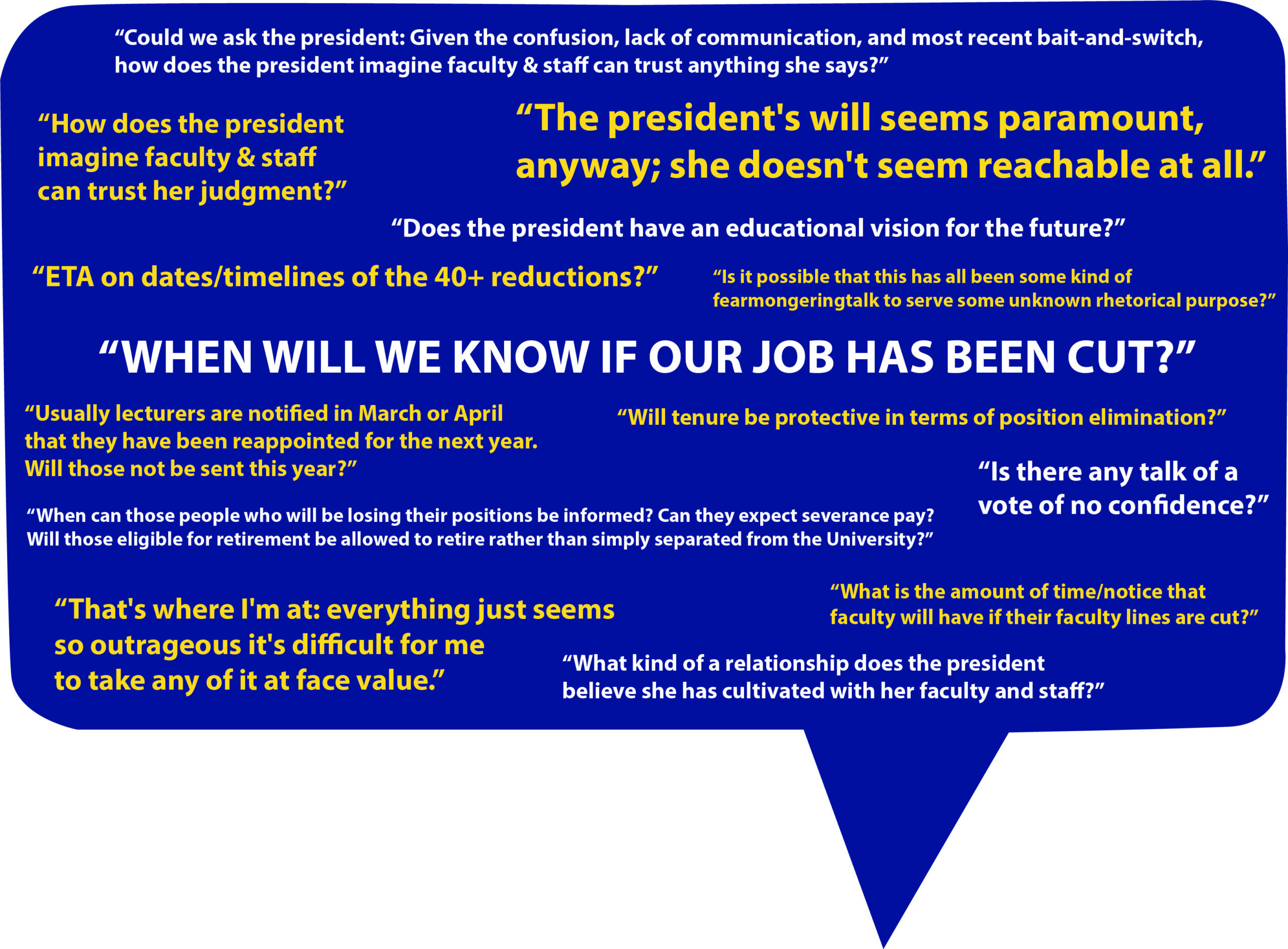 Four months after UCO President Patti Neuhold-Ravikumar announced faculty layoffs would take place this year to help reduce the $20 million budget deficit, the administration changed its rationale to an inefficient faculty-to-student ratio after revising the budget shortfall to $8 million.

In special meetings across campus, faculty members addressed their concerns over transparency at the university. In a transcript of one meeting obtained by The Vista, some asked “given the confusion, lack of communication, and most recent bait-and-switch: How does the president imagine faculty & staff can trust anything she says?”

Special meetings with certain colleges and their deans resulted following a budget forum held on March 24, where President Neuhold-Ravikumar cited a different reason for faculty layoffs, saying the university has a surplus of faculty in relation to the number of students enrolled, and this faculty-to-student ratio needs to be increased from 15-1 to 17-1.

“It appears, from what I understand, the mandate now is not so much to reduce expenditure as to reduce faculty numbers,”  said College of Liberal Arts Interim Dean David Macey.

Neuhold-Ravikumar stated in previous meetings that personnel cuts were needed because the university could not reduce anymore of the operational budget.

“How can we reduce our operating without touching the personal budgets? At some point you have to have a reckoning, that it costs a certain amount of money to just do the work, or the cost of doing business,” Neuhold-Ravikumar said during the budget forum. “But at some point, you can’t reduce anymore without not being able to do your job and that is where we are… the faster we resolve the deficit, the better off we’ll be.”

The previous $20 million budget deficit came from an accounting practice introduced by former UCO Executive Vice President Steve Kreidler. State regents require the university to state a specific use for rollover funds, unused money that goes into the next year’s budget, or the university has to request a revised budget to spend the funds. This is not ideal for state regents, as it is a time-consuming process, so Kreidler listed all rollover funds as a debit, or something that the college was going to spend. It was strategic accounting. However, without knowledge of this strategy, the debit looked like something the university owed, and was treated as a true budget deficit when, in actuality, it was a created deficit.

“We are going to structurally remove that and only bring back what is expected to be spent,” the president said.

Macey said much of the uneasiness from staff comes from the unknown, and the “objectives of the process [being] articulated in different ways at different times.” While the administration has collected data about the staffing surplus and budget, it has not been shared with anyone.

“There is a lot of uncertainty in this process. It does seem that there will be reductions in staffing,” Macey said. “How this will be accomplished over what time frame continues to be a matter of concern and discussion.”

The meetings act as a safe space for faculty to share their uncensored thoughts of the budgetary practices taking place for the following year. While some want to voice their concerns to the president, some faculty fear the answers would be “defensive and hostile.”

A faculty senator in the meeting told peers the faculty senate executive committee has a meeting with the president and the provost every month, but Neuhold-Ravikumar did not attend this month’s meeting, which was scheduled after the forum. The senate came up with a variety of questions and concerns to ask the president, but she did not take their offer to reschedule.

“I don’t particularly think she’s interested in having a conversation with us, nor is she particularly concerned that we don’t trust her,” the faculty senator said.

In an email obtained by The Vista, assistant professor Mike Breslin said he is talking with faculty senators about a vote of no confidence in the president, and asked faculty to take an anonymous poll about the president’s leadership, respect, and transparency toward faculty.

Macey said the first step in this latest phase will be to determine what the criteria are in cutting faculty. More special meetings will take place next week in the college of liberal arts to answer some of these questions.

“This is really, really hard. There’s a lot at stake here, and we’re trying to be conscientious,” Macey said. “The college of liberal arts is very committed to transparency, and keeping everyone apprised of what’s happening.”