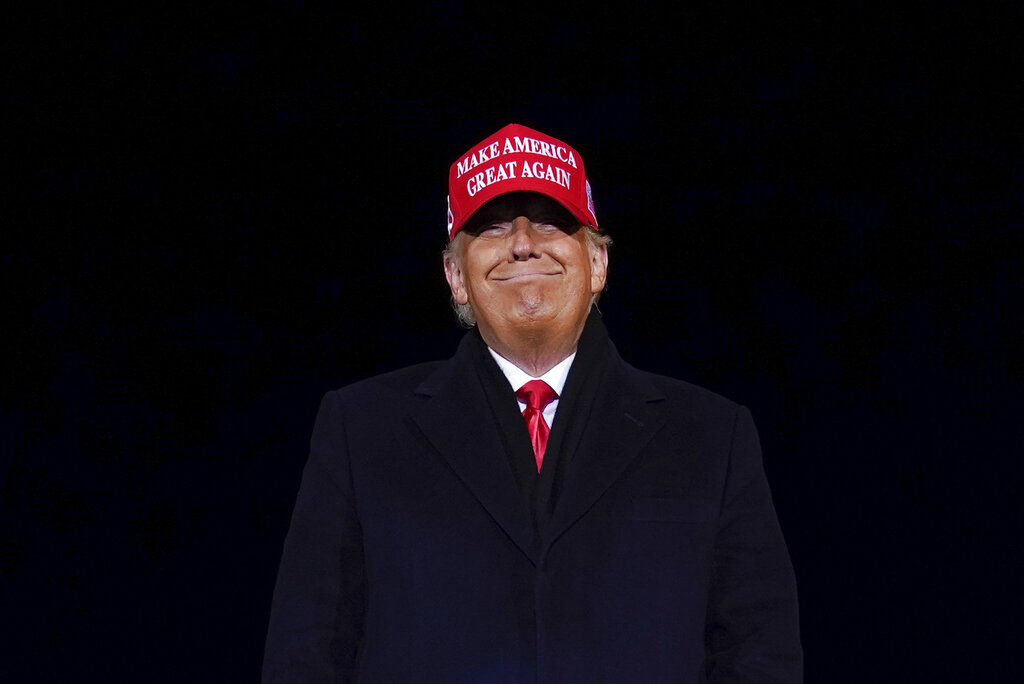 AP VoteCast: Voters saw election as a judgment on Trump

WASHINGTON (AP) — The pandemic and the fragile economy weighed heavily on voters in Tuesday’s presidential election, a contest that for many amounted to a referendum on President Donald Trump’s leadership in a time of turmoil.

AP VoteCast, an expansive survey of the electorate, found roughly two-thirds of voters said their opinion of the Republican president — either for or against — drove their choice. Only about a third said the same of his Democratic rival, former Vice President Joe Biden. This was the case nationally, as well as in many of the battleground states that will determine which candidate wins a majority in the electoral college.

The results suggest that Trump’s leadership, personality and omnipresence in the spotlight have defined the race, even as voters grappled with a historic set of overlapping crises.

As the coronavirus surges across the country, roughly 4 in 10 voters said the pandemic was the top concern facing the country. The economy followed close behind, the choice of about 3 in 10 voters. In a year of racial justice protests and debate over structural racism, about 1 in 10 voters cited racism as the most important issue.

The coronavirus outbreak has claimed more than 230,000 American lives and launched a political debate about how to stop the disease. Trump has argued for prioritizing the economy over public health protections, falsely claiming the nation was “rounding the turn” in its effort to contain the virus. Biden has cast Trump’s rhetoric as dangerous and vowed to take a more aggressive approach if elected.

Voters were divided on whether the nation has contained the spread of the virus. About half of voters said the virus is somewhat or mostly under control. And about half described the coronavirus as out of control.

About 6 in 10 voters said the government’s higher priority should be limiting the spread of the coronavirus, even if it damages the economy.

Voters in key battleground states shared anxieties about the virus and its spread. In Wisconsin, which saw an October spike in cases, close to half of voters said the pandemic was the top issue facing the country and about 6 in 10 said it was not under control. About two-thirds said the government should prioritize stopping its spread even if it means economic pain.

Trump and Biden faced a dissatisfied and distrustful electorate. About 6 in 10 voters are unhappy with the direction of the country. Roughly three-quarters said they are dissatisfied or angry with the way the federal government is working.

The majority of voters made up their minds long ago. Three-quarters said they’ve always known how they would vote. Trump’s campaign spent much of the campaign focused on turning out entrenched voters rather than convincing voters who might have been persuadable.

More than 100 million Americans rushed to vote early and by mail, taking advantage of new rules intended to make voting safer and easier during the pandemic. Trump has sought to sow doubt about the new voting systems and the legitimacy of the count, and claimed without evidence that some voters would cheat. The survey found about 3 in 10 expressing doubts that their votes would be accurately counted.

Concerns about voting were somewhat higher in Pennsylvania, another key state in the election, compared with other states: 35% were not confident the vote count would be accurate.

The pandemic has touched many personally: roughly 2 in 10 voters nationally said a family member or friend had died from the disease. And 4 in 10 households lost jobs or income as offices, schools, restaurants and other businesses closed beginning in March to try to stop the coronavirus’ spread.

Trump’s campaign tried to make the handling of the economy a top selling point for his reelection, an uphill battle as unemployment spiked to double digits this spring. A comeback has recently showed signs of stalling as federal aid lapsed because the Trump administration and House Democrats could not reach a compromise. Only 4 in 10 voters said the economy was good or excellent, with the rest describing conditions as not so good or poor.

Still, the aid spared much of the country from the pain of the recession. About 7 in 10 described their personal finances as stable; roughly 2 in 10 were falling behind. Just about 1 in 10 were getting ahead financially.

Tensions over structural racism increased this summer after the police killings of several Black Americans, setting off peaceful protests and in some cases riots, looting and violence. Trump positioned himself as a defender of police and cast the protesters as radicals — part of an appeal to suburban and older voters who he thought would embrace a law and order message.

Nationally, about three-quarters of voters called racism a serious challenge for society as a whole and for policing in particular. About a quarter said they want to see the police be tougher on crime; about a third think police are too tough.

Notably, majorities of voters in two battleground states — Wisconsin and Minnesota — disapproved of protests over policing. Both states saw violence and destruction during demonstrations after police shootings of Black men.

AP VoteCast is a survey of the American electorate conducted by NORC at the University of Chicago for Fox News, NPR, PBS NewsHour, Univision News, USA Today Network, The Wall Street Journal and The Associated Press. The survey of 106,240 voters was conducted for eight days, concluding as polls closed. Interviews were conducted in English and Spanish. The survey combines a random sample of registered voters drawn from state voter files; self-identified registered voters conducted using NORC’s probability based AmeriSpeak panel, which is designed to be representative of the U.S. population; and self-identified registered voters selected from nonprobability online panels. The margin of sampling error for voters is estimated to be plus or minus 0.4 percentage points. Find more details about AP VoteCast’s methodology at https://ap.org/votecast.