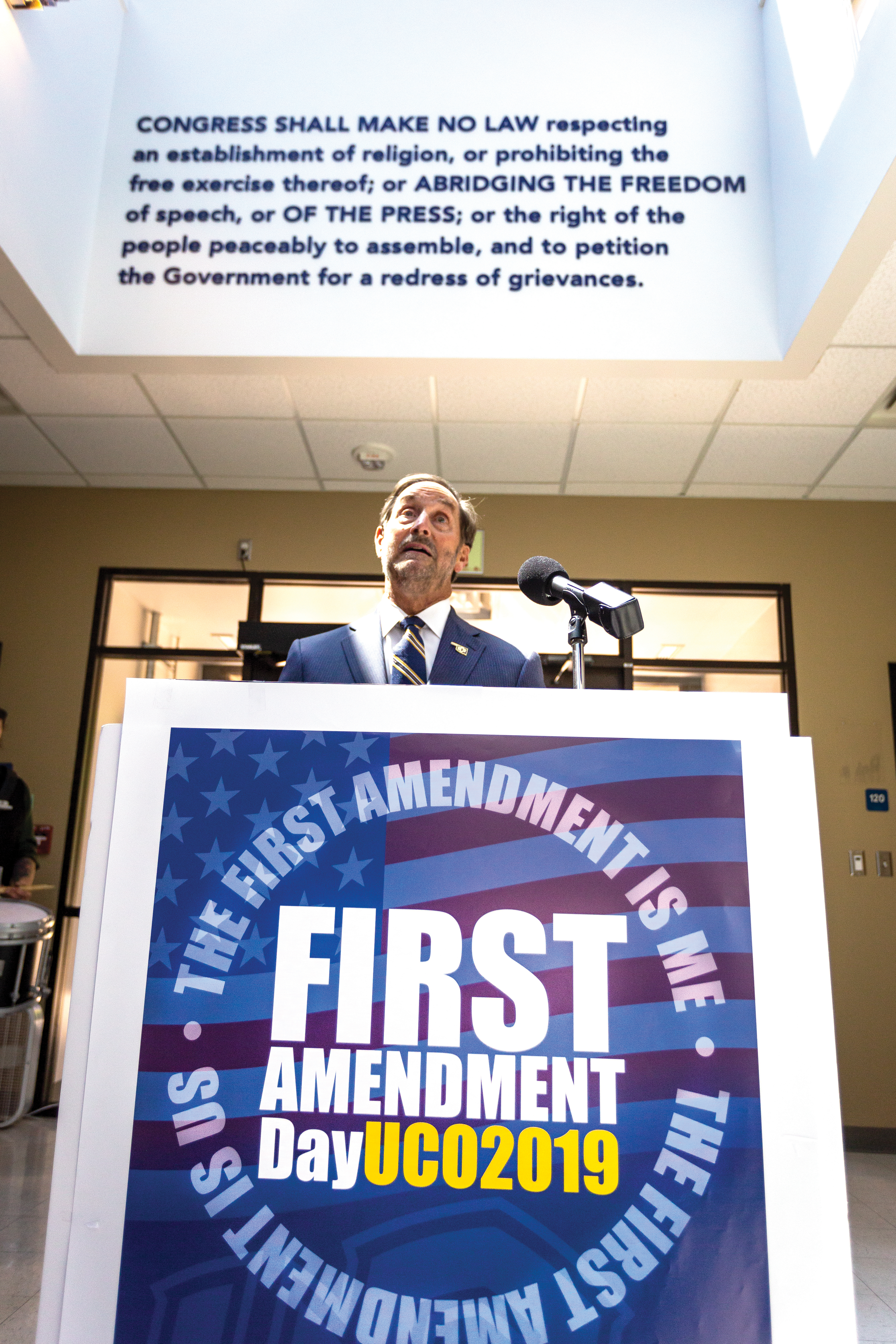 The University of Central Oklahoma’s president, Don Betz, speaks at the unveiling of the First Amendment display on April 25 in the Mass Communications building. (Tanner Laws/The Vista)

For University of Central Oklahoma President Don Betz, being the president has never been a job, but it is rather a calling.

Betz usually jokes about how he is the oldest person ever to be the president at UCO and how his wife, Suzanne, calls him the “world’s oldest cheerleader.” For many people, his retirement in June closes his eight years of being the president. But for Betz, it is the retirement for his 49 years working in higher education.

“I feel that we have been able to accomplish quite a bit of what we hoped to accomplish even though it’s been a very difficult time,” Betz said. “They’re just at a time when it turns the responsibility of the presidency to the next individual in the next generation.”

Most people do not know that a typical day for Betz starts at around 5:30 a.m. and he is usually on campus until around 6:30 p.m. Betz sometimes has responsibilities and duties during the weekend, so his week does not typically end on Friday. Despite his busy schedule with meetings and appointments, Betz always tries to support students by attending major events on campus.

“I will miss everything here,” Betz said. “It will be difficult for me to adjust the lifestyle that has been in my life for 50 years.”

For Betz, students are the customers, products and legacy of an educator. He said he always feels overwhelmed with their kindness and how they are all showering him with goodwill, and that is one of the reasons he shows up every day.

Betz served as UCO’s provost and vice president for Academic Affairs from 1999-2005. He became UCO’s 20th president in 2011, after serving as the president of Northeastern State University in Tahlequah, Oklahoma.

“I spent a great deal of time in positions of responsibility and decision-making that will impact the institution,” Betz said.

Those decisions are to create the best outcome that can work in the best interests of the students, faculty and staff, and even those outside of the university that still rely on UCO, Betz said.

“All of that predicated on the notion of what the institution will become, not just what it’s been,” Betz said. “For example, the STEM Building and the Liberal Arts Building are investments that we make for a long-term impact for 30, 40 or even 50 years from now.”

Many people told Betz his greatest achievement is the fact that he survived the last three years, during which UCO has experienced the worst funding ever experienced in the state. This has caused multiple challenges for UCO and other institutions, but even with those challenges, Betz said UCO has still maintained their vision and makes that vision become a reality in a variety of ways.

“I guess my personal achievement is that we are weathering that storm and still investing in the future of the institution,” Betz said. “And also that we have attracted outstanding students here. I’m particularly proud of the fact many of our students become successful and help to grow in and develop the state of Oklahoma and the metro.”

For Betz, the university’s financial situation has always been the biggest challenge. Aside from that, one recent challenge is the questioning on the part of media and public about the value of education

“I believe UCO will be one of the institutions that will continually convince the community that higher education is a significant player in their creation of the next version of Oklahoma and the Oklahoma City metro,” Betz said. “We have not just the responsibility to do so, we have the talent and sense of service to be relevant to the work that needs to be done.”

Reflecting on his accomplishments, Betz said no one can finish everything on their to-do list. The hardest piece for him is to raise salaries for everyone who works at UCO and he always wishes to accomplish that.

“It’s a personal challenge for me because people have been working so hard and many people still have not given it up,” Betz said. “If I could, again, with the [magic] wand, I would push up their salaries and their benefits as a way of thanking them for not giving up.”

To honor Betz and his contribution to UCO, the Regional University System of Oklahoma Board of Regents approved the naming of the university’s Don Betz STEM Research and Learning Center after him.

Sitting in his office in the Old North building, Betz said that bringing the building back is one of his proudest achievements. Old North is the oldest higher education building in the state and a seed of education for the community.

“Many people still link back to this building because the very first teachers were trained and educated here,” Betz said. “I believe in our 200th anniversary, this building will be here serving as the living testimony.”

After retirement, Betz said he will spend more time with his family and travel to several countries. He will also continue to contribute to higher education in the state and be involved with coaching other higher education administrators across the nation to be university presidents. Still, one important part of his plan is to revisit UCO.

“I will not be a stranger. I’m looking forward to attending events and getting involved in appropriate ways,” Betz said. “I am not turning around and not looking back.”

Patti Neuhold, UCO’s current vice president for Finance and chief financial officer, will become the 21st President of UCO after Betz’ retirement. Betz said the administration has been working to prepare a smooth transition.

“I’m very pleased that Patti has been selected. I have high confidence in her and will be supporting her in any way that can be helpful to her,” Betz said. “She has worked here for 12 years, and she and I have worked closely for several years. She will be a proactive leader who will be willing to listen to and work with others.”