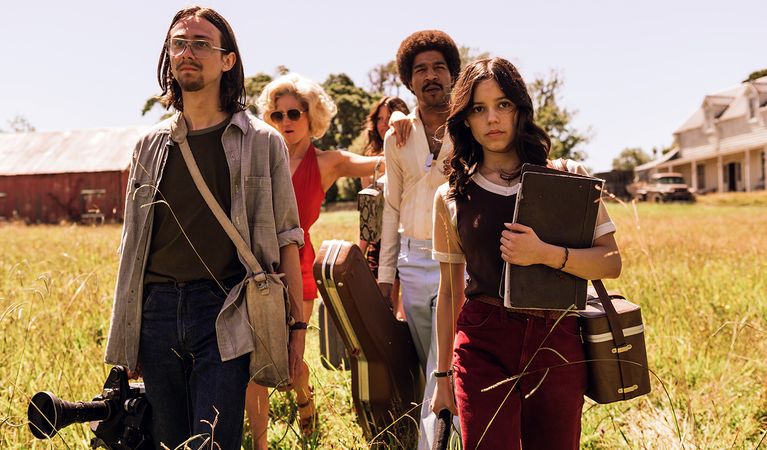 A24 delivers a typically twisted, explicit rollercoaster with ‘X’

A24’s latest horror film, “X,” begins like most of the studio’s films, slow-paced with distinct videography. Director Ti West spends a lot of the opening half of the film paying homage to early slasher films like “The Texas Chain Saw Massacre.” The opening scene takes viewers directly to the aftermath of the entire film, which helps set the uneasy tone. This creates a juxtaposition by putting the aftermath in broad daylight.

Then, we are introduced to a group of adult filmmakers on a road trip in 1978. They are trying to make an adult film at a farm in Texas, unbeknownst to the elderly couple who are letting the crew stay in the guest house on their property.

The elderly couple who stalk the guests are portrayed as conservative and religious. Most of the daylight hours are spent on the making of this adult film, starring Maxine Minx (Mia Goth), Bobby Lynne (Brittany Snow) and Jackson Hole (Scott Mescudi, a.k.a. Kid Cudi).

There is a direct shift once night falls. Lorraine (Jenna Ortega), the girlfriend of the film’s director, R.J. (Owen Campbell), decides she wants to be featured on camera in the adult film. Once the elderly couple understand what is taking place they take matters in their own hands by going after the filmmakers one by one.

The subsequent events fully transition into an elevated slasher and the ending hints at a twist involving Maxine’s backstory.

“X” is not a straightforward slasher film, but also one of the most explicit and graphic films I have seen. There are moments in the film that really showcase different themes and elements that aren’t usually touched on in films like this. There’s a surplus of themes about growing older and what that does to a person, especially when dealing with intimacy. Scenes are played to make you feel uncomfortable. Goth puts on a dual role that plays off in an interesting way. The film-within-a-film concept comments on several types of films made during that time period.

A prequel, which is set to follow Pearl’s journey before the film’s events, was filmed after production wrapped, but there is no set release date yet. “X” establishes itself as something fresh and new for the horror genre, much like Ari Aster’s films “Hereditary” and “Midsommar,” also released by A24.

“X” isn’t for everyone: it does feature explicit imagery, including the filming of the adult film in the first half and a gritty gory ride in the second. However, any fan of horror will see something they have not specifically seen before and it manages to prove itself by its stellar cast and direction.